So by popular demand, all things Jamaica and Bob Marley will be the theme for the first “Destination Fridays” event in 2016, set for February 5 from 6:30 p.m. to 9:30 p.m. Adults age 21 and over can enjoy an evening of Jamaican effervescence, with rum punch, traditional dishes, lively music, and dancing in the lobby!

Get set for performances from singer Kristine-Alicia and sax man Randy Corinthian, along with poetry by Dr. Susan Davis. Local Jamaican art photographer David Muir is also providing some cinematic sights of Jamaica’s natural bounty in the library gallery.

So come dressed to jam in your Bob Marley t-shirt and your reggae colors. Dance your way to fitness with the ReggaeFit team and channel your inner Bob Marley for the Lip Sync Smackdown – where the grand prize winner can walk away with a $200 gift card.

Jamaica is just the first of many country-themed parties being presented this year by the AARLCC. For March 18, the festivities head to India, inspired by glamorous Bollywood films. Then the celebration continues in the Caribbean, with a Cuban-inspired fiesta on April 8, and a Haitian-themed fete on May 6. The September 9th party heads to Madrid Spain, and come October 7th, the celebrations go to New York with a Harlem Renaissance theme. 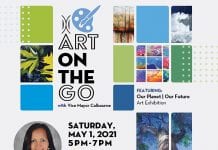