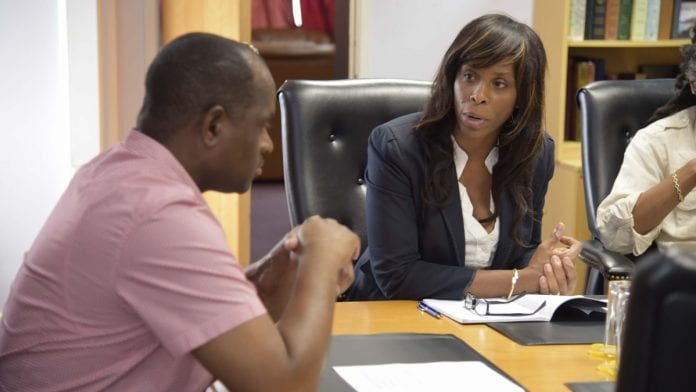 On Monday, Congress representative, Stacey Plaskett, met with Caribbean community leaders in South Florida on behalf of the Clinton campaign. The representative alongside Anika Omphroy and the Caribbean Coalition Director, Karen Green visited Little Haiti, Overtown, and heavily dominated Caribbean cities to listen to the needs of that area. Plaskett visited Joys Roti Shop in Lauderhill, sitting with officials including Broward County commissioner Dale Holness, reiterating the importance the Caribbean community plays in deciding the next president of the United States.

Speaking on behalf of the presidential candidate, Plaskett made it a point to speak directly to the Caribbean Americans in south Florida stating that they are one of the primary targets for voter registration and other support.

On her small business tour, Plaskett took time to share a moment to stop at Laparkan Shipping Company in Oakland Park, Stiles Farmers Market in Lauderhill, and The Dutch Pot Lauderdale Lakes. During the meeting at Laparkan, Plaskett introduces herself as a representative of the “entire Caribbean, to being their voice in congress, not just to talk about the needs of the Caribbean but the potential of the Caribbean.” She added that businesses like Laparken and other businesses “show the wealth and the depth of community and of understanding that occur within the Caribbean and the Caribbean Diaspora the has made the United States their home. The importance of having a strong economy in the US for those Islands.”

Plaskett made her final stop, the reason for her visit, at the Presidential Debate Watch Party held at The Garden in Lauderdale Lakes. Plaskett’s visit came only days before the Democratic candidate is scheduled to hold public campaign events to speak with the community on including jobs, education, criminal justice reform, and combating gun violence.