Caribbean-Americans awed by recollection of 9/11 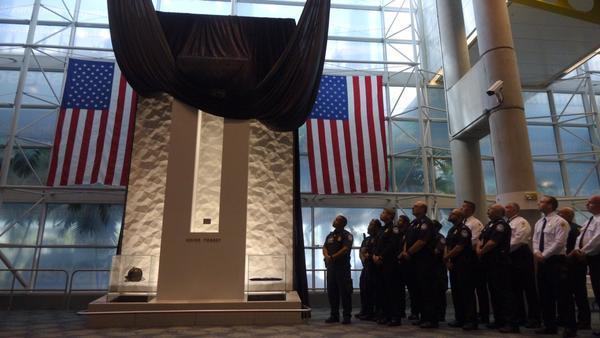 Young Caribbean-Americans awed by recollections of 9/11

Nicole Spence was just two-years old, living in Jamaica when terrorists attacked the US on September 11, 2001. “I was a toddler, and have only grown to realize the devastating impact of the attacks that killed thousands of people in New York and Washington DC in recent years living and attending school in Miami.”

Spence was one of several young South Florida residents attending a ceremony at the Fort Lauderdale International Airport on Sunday, to unveil a memorial to those who perished in the terrorist attacks.

Accompanying Spence to the unveiling ceremony was her friend Duane Curtis, 25, whose birthday coincidentally falls on September 11. Also from Jamaica, Curtis recalls plans for a birthday party celebrating his 10th birthday was “messed up” in 2001 because of TV images of the attacks, and the loss of a close family friend who died in the attack on the World Trade Center towers. “The 9/11 attack motivated me to join the US Marines, and dedicate myself to protect my adopted country. Today I am a fierce American patriot,” Curtis said.

The memorial at the Fort Lauderdale Airport is a collage of memorabilia from 9/11. This includes metal from one of the destroyed towers at the World Trade Center, an American flag and a fireman’s helmet to commemorate the several New York firemen who died in New York when the twin towers collapsed.

Curtis said he was disappointed as a student at a public high school in Palm Beach County because 9/11 was not a focused part of American history courses. “We learned about history related to the American Revolution, the American Civil War and the two world wars, but little about 9/11. I think all those [who] died that day made a tremendous sacrifice for a safer America. Although the day was very tragic, young people who were too young or not born at the time should be taught this aspect of America’s history.”

Broward County American History teacher Lorna Green, said the history of 9/11 is included in post-Civil War History classes at South Florida high schools. However, there is not much focus on the attack itself at elementary schools, but rather on the sense of patriotism and heroism resulting from the attacks. “The 9/11 attacks are still a relative recent event as far as American history goes.  I’m sure it will be just a matter of time before a formal curriculum is designed to teach students about this tragic aspect of American history.”

Green said students, “most who were toddlers or not even born then,” are always keen on learning about the circumstances around the 9/11 attacks, especially around the anniversary. “I get very inquisitive interest especially from Caribbean-American students who only learned about the details of 9/11 as they grow up in America.”

Spence’s Mom, Nora, a Transportation Security Administration (TSA) officer at the Fort Lauderdale Airport was among an honor guard consisting of TSA staffers who were part of the unveiling ceremony at the airport. The TSA was formed by the US Congress immediately after 9/11 attacks to enhance security at US airports.