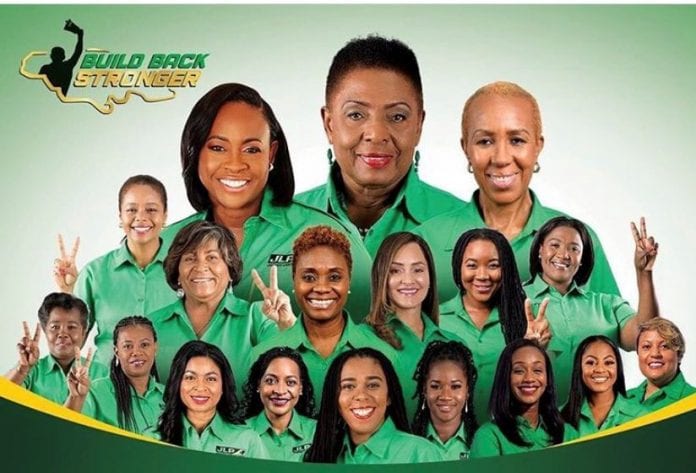 In what is being regarded as a historic general election, for several reasons, the women of the ruling Jamaica Labour Party (JLP) delivered stunning wins at the September 3 polls, pushing the Andrew Holness-led administration to secure a second term.

Of the 18 women in the JLP that contested the election, 14 women won their seats, at a win rate of 77.8%. Attorney General Marlene Malahoo Forte, Kerensia Morrison, Ann-Marie Vaz, Olivia “Babsy” Grange, Marsha Smith, Fayval Williams and Juliet Cuthbert are just a few of the JLP women that led their opponents by thousands of votes.

But perhaps the most shocking win was delivered to newcomer Rhoda Crawford, the 31-year-old who beat out the People’s National Party’s (PNP) presidential hopeful, Peter Bunting, to steal the central Manchester seat. Although many opinion polls had predicted Bunting to win, Crawford beat Bunting by 985 votes, 8,097 to Bunting’s 7112. This is the first loss for Bunting since entering into representational politics in 1993.

The historic win for the JLP means that the Jamaican parliament will now be made of 28% women (four women from the PNP included)- the largest percentage of women to ever sit in the parliament.

Overall, the entire Jamaica expressed confidence in the JLP and Prime Minister Andrew Holness. Preliminary results show the party winning 49 of the 63 seats, to sweep the elections. The only other time the JLP won by such a massive margin, in a contested election, was in 1980 was the Edward Seaga administration captured a 51 to 9  seat-majority.

The entire county of Cornwall, which had several “safe seats” for the PNP flipped and completely handed over the victory to the JLP. Surrey, with the expectation of six PNP seats, also went fully green.

Another shocker was Lisa Hanna’s fight for her seat. The high-profile PNP candidate hung on to her St. Ann South Eastern seat by only 14 votes. A recount will likely take place.

To date, Prime Minister Andrew Holness is the only JLP leader to serve two consecutive terms as leader of the country, following to consecutive contested elections.