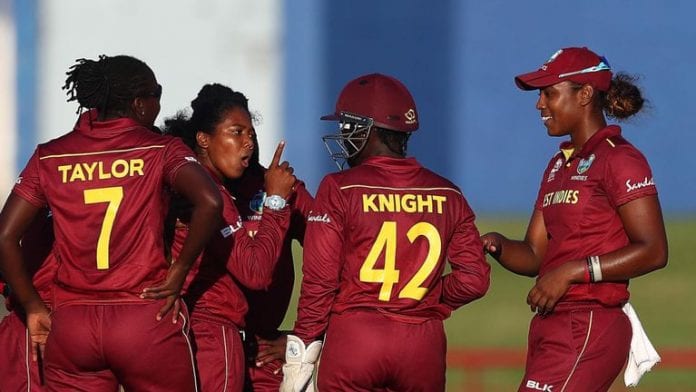 CHELMSFORD, England – West Indies suffered the ignominy of a whitewash with a heavy 135-run defeat to England in the final One-Day International of the three-match series here Thursday, to wrap a miserable outing in the ICC Women’s Championship.

Chasing a revised target of 267 off 39 overs in the rain-hit contest at Essex County Ground, West Indies were once again let down by their batting and collapsed to 131 all out with eight deliveries remaining.

Left-hander Kycia Knight, batting at number three, top-scored with 38 off 59 balls while Stacey-Ann King chipped in with 26 off 38 deliveries down the roder but they were the only two to pass 20.

Hayley Matthews (6) and Britney Cooper (2) fell cheaply to leave the Caribbean side on 27 for two in the sixth over before Knight repaired the damage in a 40-run, third wicket stand with Natasha McLean (18).

One McLean holed out in the deep in the 17th over to give debutant 21-year-old off-spinner Bryony Smith her first wicket in international cricket, the Windies resistance subsided as they lost their last eight wickets for 64 runs.

Knight was fourth out in the 22nd over, feathering a catch behind off a wide ball from seamer Kate Cross.

Captain Stafanie Taylor was unable to bat after taking a blow to her hand towards the end of the England innings. She was taken to hospital for a precautionary x-ray.

Earlier, England Women got half-centuries from opener Amy Jones (80) and wicketkeeper Sarah Taylor (70) as they defied rain to get up to 258 for four off 39 overs.

Sent in, rain halted their progress at 43 without loss in the 11th over but on resumption, they accelerated beautifully courtesy of two successive half-century stands powered by Jones.

First, she put on 84 for the first wicket with Tammy Beaumont whose 46 came from 54 balls and included six fours, before adding a further 87 for the second wicket with Taylor.

Jones notched six fours and a six in an 83-ball knock while Taylor faced 61 balls and counted seven fours.

Off-spinner Matthews was the best bowler with two for 52.