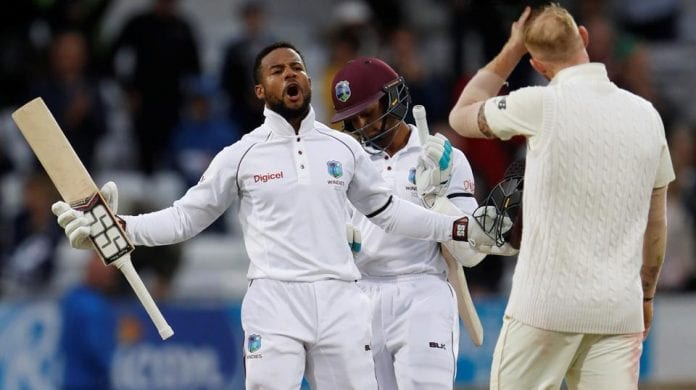 Shai Hope’s match-winning hundred inspired West Indies to victory over England in the Caribbean team’s third away win in test cricket since 2000.

Hope’s record-breaking hundred and another mammoth partnership with Kraigg Braithwaite inspired West Indies as they leveled the three-match series against England at Headingley.

Hope scored a sublime unbeaten 118 to become the first player to score centuries in both innings of a first-class game at Headingley, a feat Brathwaite had previously fallen five runs short of – benefitting from being dropped on four to punish an England performance that was badly lacking in imagination.

Brathwaite and Hope battened down to add 246 runs for the fourth wicket in the tourists’ first innings and their 144-run union on Tuesday helped secure the Windies’ first Test win on the road since 2012 and just a second in England since the turn of the millennium.

Joe Root’s battery of seamers toiled away unsuccessfully, with Moeen Ali (2-76) also finding the pitch not greatly helpful to his off-spin, despite a full Test’s worth of wear and tear.

It allowed West Indies to calmly chip away at their victory target of 322 and erase memories of the mammoth defeat in the series opener, Hope fittingly hitting the winning runs.

Brathwaite and Kieran Powell had set the tone with a positive start before Powell (23) was removed by a Board delivery that took the edge on its way to Ben Stokes in the slip cordon.

The hosts’ luck was in as Broad attempted to catch Brathwaite off his own bowling and inadvertently deflected the ball onto the non-striker’s stumps, where a rueful Kyle Hope departed for a duck.

The younger of the Hope brothers’ performance was one to be celebrated, however, neatly picking the gaps in fields that Root seemed reticent to experiment with, even as the batsmen grew more and more comfortable.

Jermaine Blackwood’s arrived at the crease was belligerent from the outset as he bludgeoned Anderson over his head for six.