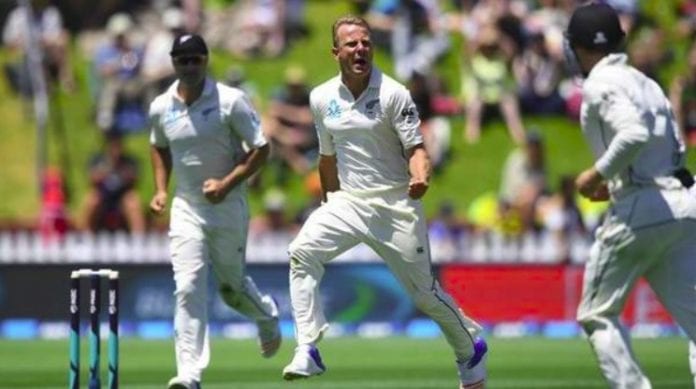 West Indies face a daunting task in the second Test with New Zealand in New Zealand, need 444 runs to win.

West Indies opener Kieran Powell completed a ‘pair’ to leave West Indies in dire straits in their pursuit of a world record target of 444 runs, after Ross Taylor’s 17th Test hundred put New Zealand in a near invincible position, in the second and final Test here Monday.

Windies concede a lead of 151

Resuming the third day at Seddon Park on 215 for eight in their first innings, West Indies added just six runs before being dismissed for 221, to concede a lead of 152 runs.

The Kiwis went on to score 291 for eight in their second innings, with Taylor again impressive with an unbeaten 107, joining Martin Crowe and current captain Kane Williamson as the top century-maker’s for New Zealand.

Left with 40 minutes before close, the Windies lost the left-handed Powell without scoring for the second time in the match when he was out caught off left-arm seamer Trent Boult.

Left-hander Shimron Hetmyer looked good with three fours in a score of 15 before falling to pacer Southee in the penultimate over.

Windies Kraigg Brathwaite was unbeaten at close of play with 13. He will carry the fight for the Caribbean side heading into Tuesday’s day three, along with Shai Hope on one.

Finish off Windies in 17 deliveries

Earlier, New Zealand needed just 17 deliveries to finish off the Windies first innings, with Boult bowling both Miguel Cummins (15) and Shannon Gabriel in successive deliveries, to end with four for 73.

West Indies then struck early when fast bowler Cummins, who finished with three for 69, removed Jeet Raval for four in the eighth over with 11 on the board, as the left-hander bungled a pull and gave the bowler a return catch.

However, captain Williamson then took the Windies’ momentum away with an urgent 54, anchoring two small stands to lift new Zealand to 96 for two at lunch.

The right-handed Williamson faced 64 balls and struck eight fours, adding 31 for the second wicket with opener Tom Latham (22) and a further 58 for the third with Taylor.

Cummins broke the stand in the second over after the interval, shattering Williamson’s stumps with a searing yorker before removing Henry Nicholls cheaply for five, but any hopes of engineering a New Zealand collapse were quickly scuppered as Taylor took control of the innings.

Dropped on 35 by Hope at gully off Gabriel, Taylor made the most of his luck to reach his half-century off 119 balls before gathering his second fifty off a mere 53 balls, with a lovely punch down the ground for four off left-arm seamer Raymon Reifer.