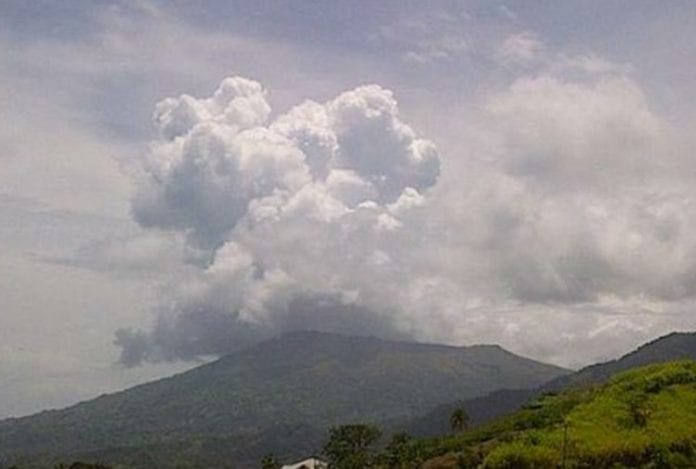 The Seismic Research Centre at the University of the West Indies, St. Augustine is monitoring the La Soufriere volcano in St. Vincent after reports of some volcanic activity on December 29.

The alert level associated with the volcano, was on Tuesday, raised from yellow to orange, the third-highest on the four-color scheme, as the volcano entered an effusive eruption stage. 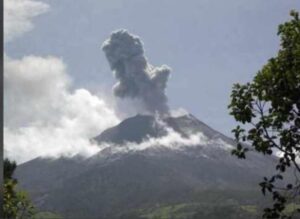 This means that magma is oozing from the volcano and is distinct from the explosive eruption, such as that of 1979, although one could follow the other.

With the orange alert, residents of the northern third of St. Vincent –  from Georgetown to Fancy, in the east, and north of Belle Isle, in the west — have been told to prepare to evacuate at short notice, should such an order be given.

“What is happening now is a serious thing. The volcano is erupting,” Professor Richard Robertson of the University of the West Indies Seismic Research Centre, in Trinidad and Tobago, told reporters by video link.

He said that scientists would try their best to give at least 48 hours warning in the case of an explosive volcano.

“We are trying to make sure you have whatever the time you need to move people out of harm’s way — whether it is 48 hours, 24 hours, whatever time that is. We want to be in a position to give you that and we will try as hard as we can to that,” said Robertson, whose team could be in St. Vincent, bringing additional equipment as soon as Wednesday evening.

“I think you have to prepare for a rocky road for the next couple of months, unfortunately. Prime Minister, I think St. Vincent dodge COVID, but I am not sure you are dodging the volcano, unfortunately,” Robertson said.

Speaking at the same press conference, Prime Minister Dr Ralph Gonsalves, urged residents in the red zone to be ready to evacuate at short notice but emphasized that the alert was not an order to evacuate.

Robertson said that increased activity had been noted at La Soufriere since November 16.

He said that while notifying the public –  this is a decision for Kingstown,  as there had been similar levels of activity at the volcano, in the past, which were not followed by an eruption.

However, there were eight activities on December 23, followed by a quiet period during which no activity was recorded.

Then on Sunday, the center’s staff was made aware that a NASA satellite had detected a hotspot in the crater of the volcano.

When the La Soufriere Monitoring Unit, in Kingstown, visited the 4048-feet high volcano on Tuesday, they discovered that there is a diffusive emission of magma extruding out of the volcano.

“What is happening now is similar to what was happening in 1971-1972,” he said, adding that unlike then, there is no lake in the volcano.

“But you have the same kind of mass growing on the side.  The mass is currently confined in the crater of the volcano. Because of the configuration of the crater, a lot of the hazards, as it presently stands, are in the crater itself and on the immediate rim of the crater. So the hazard would be from the rock itself, which is simply coming out and the rock is going to be hot, so you don’t want to be close to when it’s growing.”

He said that the other threat is the possibility of something else happening and warned against unofficial persons visiting the doom of the volcano, saying that in addition to the dangerous emissions, rapid change at the crater is a serious threat.

“Don’t do it. It’s a bad idea… I’ll say this about volcanoes, no matter what people think, and La Soufriere is one of them: whatever you think – the volcano, when it does what it does, you take action, otherwise it is too late for you. So those who go on the mountain and want to look in and get overcome by gasses – I hope they are just sensible enough not to put themselves in harm’s way.”

He said the volcano either erupts effusively as is happening now or explosively, as in 1979.

He said that in the coming weeks or months, scientists will evaluate whether the volcano is moving from one stage to the next and try to give enough warning so that residents could take the necessary actions. Robertson, however, said that the eruption could remain just effusive.

According to Prime Minister Gonsalves, the center is expected to deploy a team to St. Vincent and the personnel could arrive as soon as Wednesday.