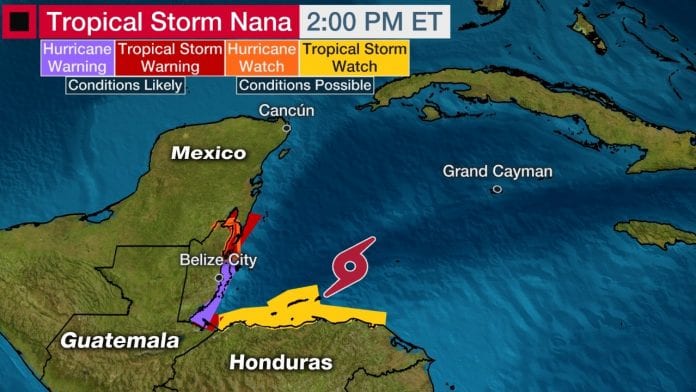 Nana, the 14th named tropical storm of the 2020 Atlantic Hurricane Season, was inching towards Belize on Wednesday with little change in its strength and remains on track to become a hurricane later Wednesday or on Thursday.

The Miami-based National Hurricane Center (NHC) in its 2.00 pm (local time) bulletin, said that the storm was now 345 miles east of Belize City with sustained maximum winds of 60 miles per hour (mph).

The Belize Port Authority (BPA) has since announced the closure of all ports “in order to avoid danger to life and property” and that all foreign-flagged ships in Belize are to depart and be clear of the territorial seas of Belize no later than 1200 hours (local time) on Wednesday.

The BPA said it was advising all ships to seek safe harbour in accordance with their emergency plan.

“Ships are prohibited from entering the ports and harbours of Belize until this order is lifted in writing by the Ports Commissioner,” the BPA added.

It said that Nana is moving towards the west near 16 mph and this general motion with some decrease in forward speed is expected today.

“A westward or west-southwestward motion is expected tonight and Thursday. On the forecast track, Nana will be moving near but north of the coast of Honduras later today, and the center should make landfall on the coast of Belize tonight or early Thursday.”

The NHC said that reports from an Air Force Reserve Hurricane Hunter aircraft indicate that maximum sustained winds are near 60 mph with higher gusts.

National Coordinator of the National Emergency Management Organization (NEMO), Shelton Defour, said that the hurricane presents another problem for the Caribbean Community (CARICOM) country that is also dealing with an increase in the number of coronavirus (COVID-19) cases.

“Exactly because we have to shelter people and if you are COVID-19, you are still a Belizean or a person living in Belize so you have to get a shelter. If you a regular, normal person who is asymptomatic you will still need to go to a shelter.

“So, we have segregated the shelter for regular, non-symptomatic persons arriving for shelter and known COVID-19 persons informed by the Ministry of Health will have a specific shelter that they will have to go to. So, we are just separating people so that contamination and transmission are reduced as possible,” he said.

“I have been in this business for some time and this has never occurred in the Caribbean. SO, we are doing the best, simple common sense thing that ought to be done to alleviate any potential situation. The elderly should not shelter with regular people. So, there will be a room or classroom that will be utilized for different categories of people. The shelter managers and wardens have a shelter protocol that they will have to follow and go by,” he added.

The NHC said that Nana is expected to produce three to six inches of rainfall accumulations through Thursday night near the northern Honduras coast, southern and central Belize, northern Guatemala, and the northern portion of the Mexican state of Chiapas

It warned that swells affecting portions of the southern coast of Jamaica and the Cayman Islands, and will spread along the coasts of Honduras and Belize Wednesday, adding “these swells are likely to cause life-threatening surf and rip current conditions.”