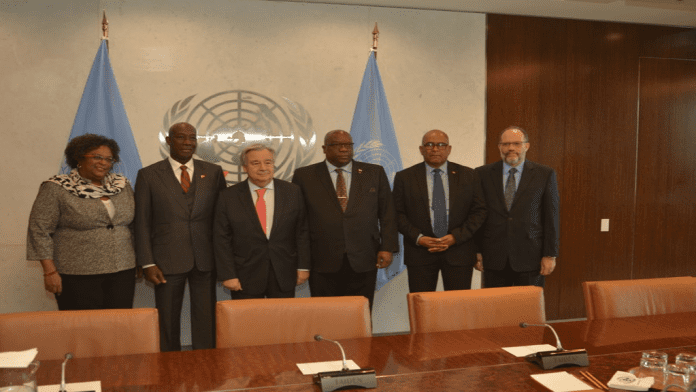 A brief United Nations statement said that they had also discussed the eligibility criteria for access to concessional financing.

“They further exchanged views on challenges to peace and security in the Caribbean region,” the statement said.

But according to a statement issued by the Office of the Prime Minister in Port of Spain, Rowley also met with Vladimir Voronkov, the Under-Secretary-General of the United Nations Counter-Terrorism Office.

The statement noted that as a result of the deliberations, Trinidad and Tobago has been selected to host a United Nations conference which will focus on combating the threat of terrorism in the region. The event is carded for Port-of-Spain early next year.

It said that the meeting will support the collaboration between the United Nations Office of Counter-Terrorism (UNCOT) and the Caribbean Community (CARICOM) for the implementation of a regional Counter-Terrorism Strategy.

“Dr Rowley welcomed the opportunity to discuss and deepen Trinidad and Tobago’s cooperation with the United Nations on matters related to counter-terrorism which remains a matter of significant importance to the government,” the statement added.

It said Rowley highlighted the work that has been done to combat terrorism and violent extremism in Trinidad and Tobago through, among other things, the allocation of enhanced resources to assist in operational and intelligence coordination. This work also includes the amendment of several key pieces of legislation to prevent and counter acts of terrorism and its financing including, most recently, significant amendments to the Anti-Terrorism Act in August 2018.