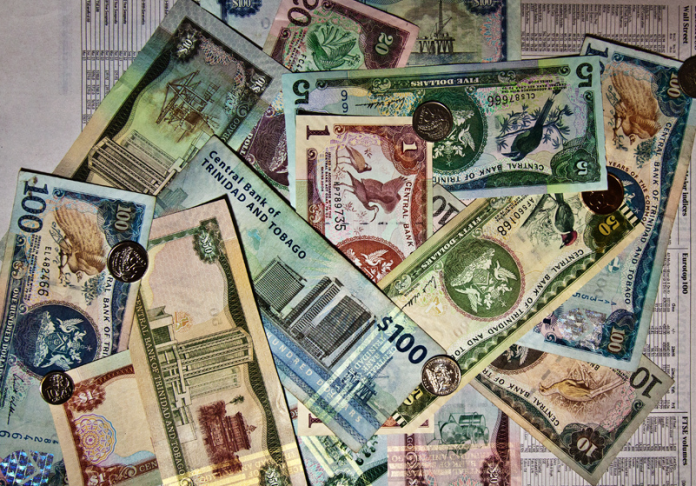 The Trinidad and Tobago dollar exchange rate against the United States dollar depreciated by an estimated three per cent over the first three months of this year, the Central Bank of Trinidad and Tobago (CBTT) has announced.
It said that based on historical patterns ‘pass through’ effects to domestic prices could take about two to three months.
“Liquidity in the domestic banking system remained at relatively comfortable levels over the first three months of 2016. Commercial banks’ excess reserves at the Central Bank averaged TT$3.8 billion (One TT dollar =US$0.16 cents) daily during January and February 2016 rising to just over four billion dollars in the first half of March.”
The Central Bank said it utilized its various instruments to manage banking sector liquidity and that over the period January to mid-March 2016, it withdrew roughly TT$1.5 billion via net open market operations, and rolled over a commercial bank fixed deposit valued at TT$1.5 billion on March 14 2016.
“Since the last Monetary Policy Announcement at the end of January 2016, TT-US interest rate differentials have been broadly favourable. The differential on the 91-day Treasury securities stood at 86 basis points as at March 15 2016, from the 67 basis points at the end of January 2016. On the other hand, the differential on the 10-year Treasuries held steady at 197 basis points, from the 196 basis points over the same period.”
The CBTT said that reflective of supply and demand conditions in the foreign exchange market, the Trinidad and Tobago dollar exchange rate against the US dollar depreciated by roughly three per cent over the three-month period January – March 21, 2016. The local dillar is being exchanged at US$0.15 cents).
It said that the oil rich twin island republic continues to face the economic challenges posed by lower energy prices, operational issues and maintenance-related activities in the domestic energy sector.
“Initial estimates suggest that the energy sector contracted by around five per cent (year-on-year) in the fourth quarter of 2015, while provisional information also allude to anaemic activity in the non-energy sector. Early indications for 2016, including a slowdown in new car sales and cement, are that the lull in economic activity may have continued into the New Year,” the CBTT added.
It said that the latest official statistics from the Central Statistical Office (CSO) indicated that the unemployment rate increased to 3.4 per cent in the third quarter of 2015, up from 3.2 per cent recorded in the previous three-month period.