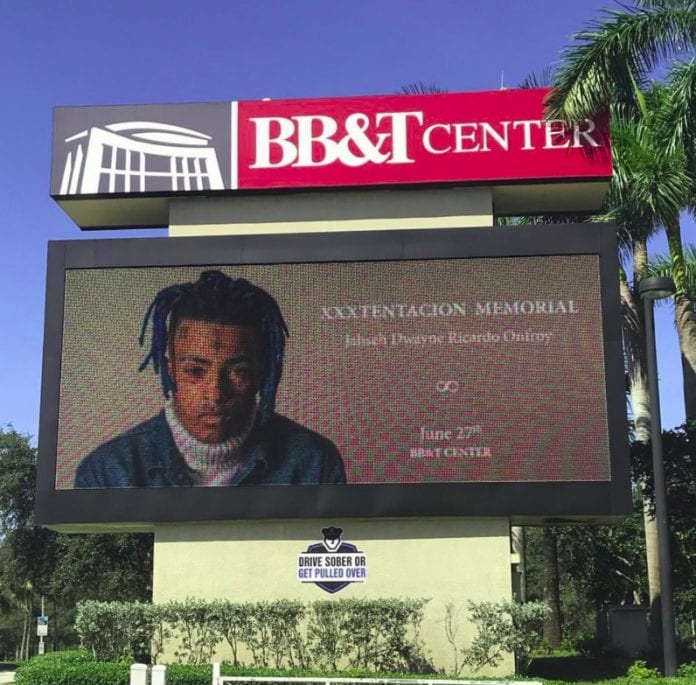 Thousands of a largely young but diverse fan-base braved 90-degree heat to stand in line patiently outside the BB&T Arena in Sunrise, FL, Wednesday to bid a final adieu to Caribbean-American rapper, XXXTentacion.

Many traveled across the country and Florida to file by the open casket of the rapper, born Jahseh Dwayne Onfroy, in Planation, FL, 20 years ago.  A number emerged from the hockey arena in tears and emotionally shaken from the experience, according to News Americas reports. Police in golf carts watched the crowd while the musician’s song “Sad!” played.

During the public viewing, which ran through 6 p.m. Wednesday, XXXTentacion’s image was shown on a sign outside the BB&T Center. His mother, Cleopatra Bernard, shared a picture of it on Instagram on Wednesday.

“Come out and say your final goodbyes,” Bernard wrote. “He considered you all family and I wanted to do something special for you all.”

XXXTentacion’s public memorial held at the home of the NHL’s Florida Panthers, nine days after he was gunned down inside his BMW in the parking lot of the Riva Motorsports store at Sample Road and Dixie Highway in Deerfield Beach, FL. The funeral itself will be a private affair held on Friday.

The young rapper was born to Jamaican parents Dwayne Ricardo Onfroy and Cleopatra Bernard but was mainly raised by his grandmother, Collette Jones in Pompano Beach, Florida and Lauderhill, Florida.

XXXTentacion drew headlines not only for his success, but also for legal problems, including his arrest on charges he beat his girlfriend.

One arrested, search on for more suspects

XXX’s killing has so far resulted in one arrest, but detectives say they’re looking for additional suspects.

Dedrick Williams, 22, of Pompano Beach, was arrested on June 20, and faces a charge of first-degree murder.

On Wednesday, the Broward Sheriff’s Office also said it was looking for a person of interest in the case: Robert Allen, 22, of Fort Lauderdale, who was seen in a surveillance image at the same store where XXXTentacion was shopping on the day of the killing.