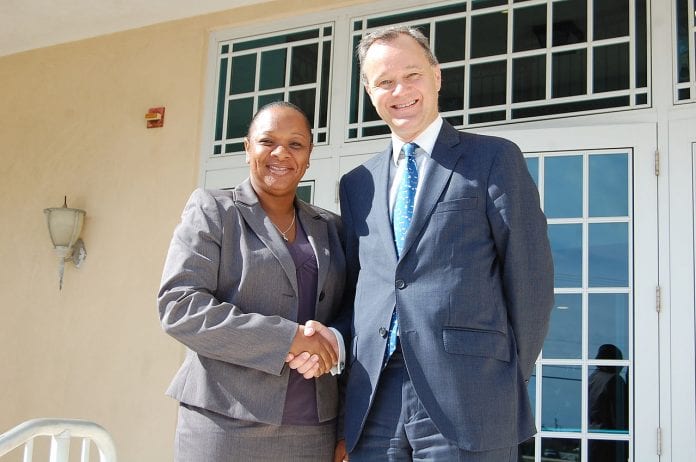 History was created in the British Oversees Territory of  the Turks and Caicos Islands on Thursday, December 15  when attorney at law Sharlene Cartwright Robinson was elected the first female premier after leading the People’s Democratic Movement (PDM) to victory.

On the weekend, Cartwright Robinson, who was born in The Bahamas , received the Proclamation for Premier from Governor John Freeman and will serve a four-year term.

An attorney, she was admitted to the bar in the TCI in 1998 and eventually opened her own law firm – Cartwright  & Co. while also lecturing at the Turks and Caicos Islands Community College. She entered the political area and became a candidate in the general elections of 2003 and 2012.

Cartwright Robinson, was the first female to serve her party as Vice Chairman, Secretary General and National Chairman and Deputy Leader.

In 2012, she was appointed leader of the PDM  and in the general election of that year she was deemed the most popular politician after amassing the most votes of the all island candidates.

While on the campaign trail in the lead up to this year’s general election, Cartwright Robinson,45, promised citizens that they will have their “fair share “ of wealth. She then led the PDM to victory, winning seven of the 10 constituencies.

An elated Cartwright Robinson told supporters that the new government would stick to the policies outlined in the PDM manifesto and reiterated that all citizens including ‘Belongers’, will have a “fair share” of the wealth of the TCI.

“For too long the Belongers of the Turks and Caicos Islands have been denied their rightful share of the wealth of our country. For too long those holding political office have diverted funds away from where it rightfully belongs: it belongs in the pockets of all our Belongers. For too long we have had to tolerate the empty promises of false and weak leaders in the previous governments. No more… the time for talk is over, the time for action is now,” she added.