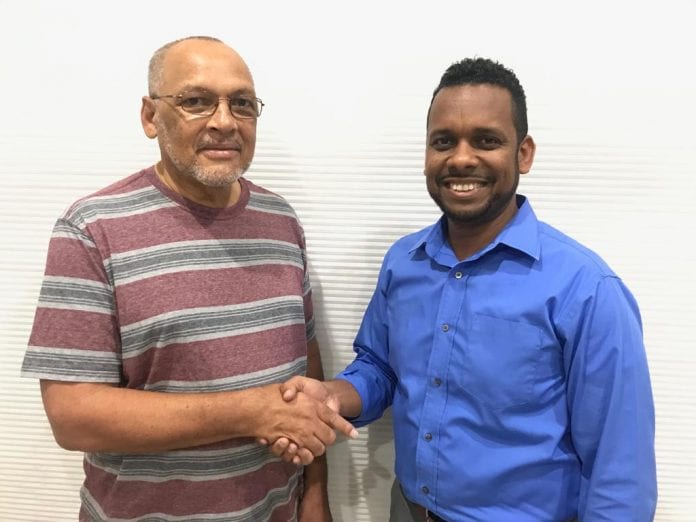 Ft. Lauderdale, FL – April 4, 2019 – – Transforming America Through Interaction (“TATI”), Inc., a South Florida community organization, recently announced the appointment of Garfield Wright as the new President of the organization. The official handover took place at a recent meeting of the Board of Directors where outgoing President, Albert Lettman handed over his presidency to Mr. Wright.

“The Board of Directors is looking forward to working with the energy that Garfield has brought to the organization,” says Tanya Ragbeer, Chair. “He has great plans for the future of the organization and it will be exciting working together to put them into motion.”

Wright, who was born in Kingston, Jamaica, attended Jamaica College after which he migrated to the United States in 1991. He spent 3 years in New York where he worked, attended the College of Staten Island, and volunteered in his spare time. Wright moved to Florida in 1994 where he attended Broward College.

Garfield Wright has a background in supply chain and is a Supply Chain Manager with Interplex. A father of two, when he is not volunteering, spends his time enjoying a good game of soccer; whether playing scrimmage on the weekends or watching it with his friends.

“It is an honor and a privilege to be selected as the new President of TATI,” said Wright. “I want to personally thank Albert Lettman for his 2 years of service as President. He has helped to keep us focused on our mission without fail. I also want to thank all our past and present Board Members, Advisors, sponsors, supporters and well wishers; we would not have been able to continue our mission without your support. I look forward to our continued partnership.

“As we move into our 13th year, we look forward to expanding our reach by increasing the awareness of our mission,” Wright continued. “TATI is committed to uniting, educating and mentoring youth. By merging cultures, we will instill strong moral values, personal identities and healthy communities. By bridging social, cultural and generational gaps, we will develop Caribbean American pride and a solid foundation for brighter tomorrow. I challenge you to join us along this journey.”

To learn more about Transforming America Through Interaction (“TATI”), Inc., visit their website at www.taticaribbean.com, or call 954-895-8384.