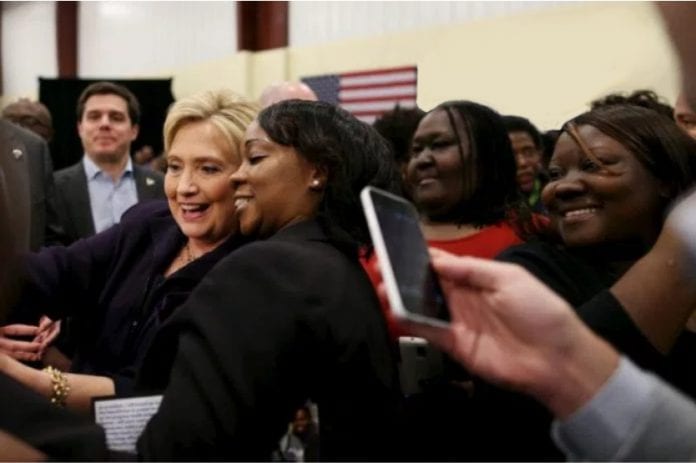 It’s no secret that South Florida has a large percentage of registered Democrat voters. Included in these are over 30 percent are either Caribbean or African Americans.  As was evidenced during the Democratic Party primary election on March 15,, the overwhelming support of these voters are for Hillary Clinton. With her now being poised to be the Democratic Party’s candidate in November’s general elections, not only are these voters prepared to cast their vote for Clinton, but several are volunteering to actively campaign for her.

Earlier this month the Clinton campaign opened a campaign office in Wynwood, Miami Dade. Among the primary objectives of tis office is to target and ensure a heavy turnout of black and other minority voters in November.

In recent weeks the Clinton campaign has been holding conference calls and meetings with Caribbean and African Americans in South Florida in an effort to engage them in the campaign.

FIU students and Caribbean Americans,  Millie Savoy and Stanford Rangeet said they have volunteered to be actively involved in the campaign.  Rangeet said “I am ready to stuff envelopes, make robo phone calls, and walk door to door campaigning for Mrs. Clinton. She is the only sensible choice in this election.”

Savoy said, her concern is that black voters in South Florida will not turn out in large numbers, “as they take it for granted   that since the region has a large percentage of Democratic voters, their vote doesn’t matter.  For Hillary to win this state we musn’t only target Democrats, but influence independent voters to vote Democrat. A lot f work is needed.”

Simone Ward the Florida director for Clinton’s campaign said South Florida is extremely important to the campaign’s strategy to win Florida which she describes as the largest and most important battle state in the presidential elections. “The diverse population of South Florida, and all the people of Florida are represented by, and is critical to this campaign.”

Although several recurring polls show strong support by black voters for Clinton, the national campaign has employed staff to specifically target the black vote.  Nadia Garnett, an African American,  has been assigned as the African-American Vote Director and is leading  overall strategic efforts. Underscoring the concerns raised by Savoy, Garnett says the strategy is to mobilize a larger black vote for Clinton in 2016 than the 66 percent Barack Obama received in 2012 and the 64 percent that voted in the 2008 presidential elections.

Savoy and Rangeet are also included in a group of young Floridian students and professionals who are working assiduously to escalate more Caribbean and African American residents applying for US citizenship and register to vote to be eligible to vote in November. “Recent research is still showing  large percentages of Caribbean Americans who are eligible for citizenship are still green-card holders, and an equal large percentage who are citizens, and mostly under age-30, have not registered to vote. More volunteers are needed to participate in citizenship drives, register voters and influence voters to turn out to vote in primary elections on August 30, and most importantly in November.”