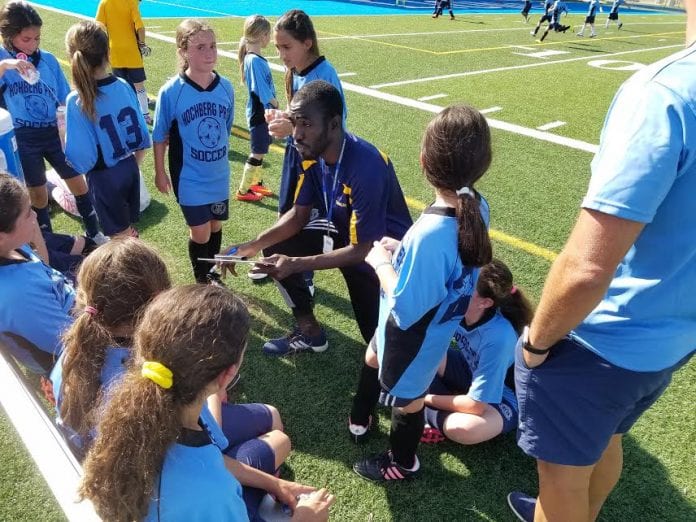 Jamaican, Tajay Higgins, contributes sports, soccer in particular, as the engine that has promulgated him from a tough community in St. James, Jamaica to be close to attaining a master’s degree at St. Thomas University in North Miami, and a career in sports administration.

In an interview with National Weekly, Higgins, 25, said that he owes everything to soccer, a game he loves passionately. “Soccer has enabled me, through scholarships to come to the US where I successfully pursued and graduated with a bachelor’s degree in Business Administration, and pursue a master’s degree.  Sports is such a positive influence.  It has taught me discipline, time management and has other positive influences on my life.”

Growing up in a tough neighborhood in Jamaica where crime is abundant, children easily got caught up with bad crowds and bad behavior.  “My Dad left when I was around 8-9,” said Higgins.  “I was young, and was close with him.  That was rough.  It kind of toughened me up a lot, and helped me deal with a lot of things; it helped me to learn to cope with things that are outside of my control.”  Higgins says that he had to encourage himself to rise above the odds and stay focused on his goals.  “Seeing my Mom work as hard as she did because of it, made me learn too, not take things for granted.”

When asked what kept him out of trouble, Higgins said “my Mom was a law enforcement [officer], even if I could have gone that way, my Mom would never allow it.”

Higgins said he can’t remember when he didn’t love soccer. “I played the game almost daily growing up and always saw soccer in my future.” He said playing for the Herbert Morrison Technical High School in Montego Bay, and the St. Elizabeth Technical High School 2009 Dacosta Cup Championship team, he had dreams of advancing his soccer career as a talented defender (center back), but fate stepped in. “Last year I experienced a very serious knee injury, which took me out of the game. This made me rethink my future, leading me to focus on a career in sports administration rather than as a soccer player. While I may be able to play soccer again after completing therapy on the knee, there’s no guarantee how effective I‘ll be able to play. I can however make great contributions, especially to the youth here in the U.S and in Jamaica, in sports management.”

After he graduates this December with his advanced degree, he plans to take a year off from his other goal to pursue a doctoral degree, and finalize the course and exams to obtain his coaching license. Currently the coach of Hochberg Preparatory School soccer team in Miami, and the Miami Lakes Soccer Club, his ambition is to also coach more advanced teams. The Hochberg team won the Jewish League Championship in May.

One of his long term goals is to one day develop and own his own soccer team. In the meantime, he plans on remaining in the U.S after graduation and use his qualification in sport administration to build soccer as a major sport. Passionate about sports’ potential for positive development of youth, “Look where sports took me,” continues Higgins, “it takes great effort and commitment, but sports can bring a lot of benefit in one’s life.”

He says through sports in Jamaica, the U.S, including his part-time job in the sports department of St. Thomas University, Higgins has several outstanding sportsmen, including members of the Miami Heat who continue to have a positive influence on his life. “I firmly believe a lot more can be done for the youth through soccer, or any other sport, to enable them to live better and more productive lives. There are many positive influences in sports.”

Judy Mowatt to be Honored at the Caribbean American Heritage Awards