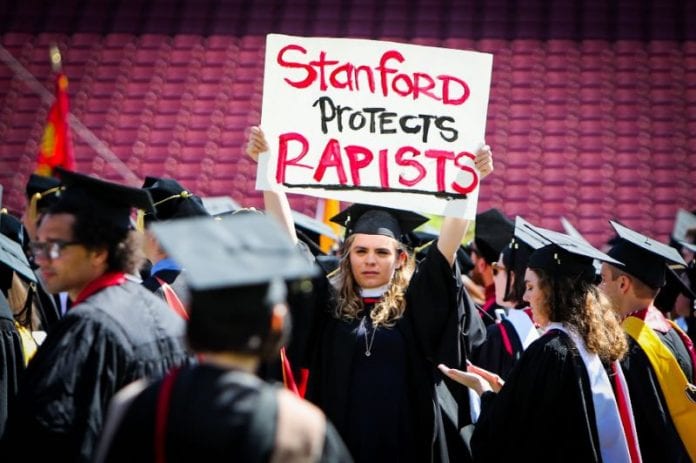 A recent court ruling in a college rape case went viral in California, when Judge Aaron Persky sentenced a privileged, young, male white student and champion athlete to a mere six months in jail (out of a potential 14-year sentence) for brutally raping a young woman on the Stanford University campus in California.

While there’s public outcry at the low sentence for such a serious assault, compared to the life sentences often shelled out by the courts for nonviolent crimes, this decision also has implications for women who are victims of women from sexual abuse.

Lately, there have been increasing reports of sexual assault on female students on American college campuses. There have also been publicized reports of women subject to sexual assault in the armed forces and the workplace. Abduction and sexual assault against student also make the headlines. Meanwhile, domestic violence continues unabated against women in relationships, with several incidences culminating in serious injury and death.

It often feels like the moral fabric of society relating to women is badly tattered. Each day there’s a new hole in the little untorn fabric. There’s great concern that sexual and other physical abuses against women are getting worse, not better.

This may be, perhaps, due to our culture’s continued perception of women as objects of exploitation rather than citizens deserving dignity and agency. Through social media we see women are increasingly targeted for sexual exploitation.  Several websites regularly expose women of all races and ethnicities explicitly nude, sometimes in graphic sexual acts. Meanwhile, the images of provocatively dressed women are used as mere decoration in advertisements, despite years of complaints by gender advocates. This culminates into a culture that perceives women as targets for sex, rather than fully realized human beings.

Meanwhile, we have a judicial system that has not done enough to provide a sense of security to sexual assault victims, often failing to execute justice. While Judge Persky’s implausible sentence to a privileged, young, white man is unacceptable, his action only echo the injustices often experienced by women who have been sexually abused. According to a report by The Rape, Abuse and Incest National Network, one woman in every six has been the victim of an attempted or completed sexual assault. Yet according to the report several women are reluctant to report sexual harassment. The vast majority of women don’t report such abuse, wary of the resulting humiliation, embarrassment and the penchant for some attorneys and courts to make victims the instigators or perpetuators.

While men in the community are urged to be more respectful of women, this appeal struggles with the limited, sexualized views of women in today’s culture. We as a community both men and women, must commit to change, aggressively militate against abuse and misogyny. We must be bold enough to report when abuse occurs, while maintaining positives roles as parents, spouses and community leaders.