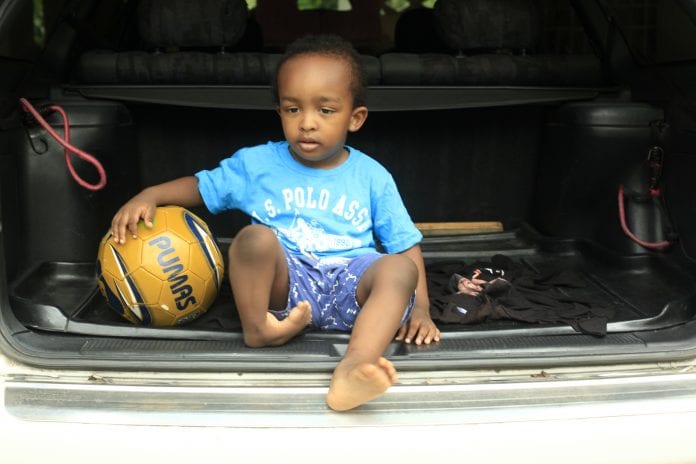 When the difference between having functioning legs or a permanent disability is US$250,000, the quest to find funds is an uphill battle for Jamaican mom Sherika Harris and her son Rafael. Still hopeful, they are depending on the kindness of others to help raise the money.

In 2015 Harris gave birth to a son, Rafael, in Jamaica’s capital city, Kingston. She and Rafael’s father were filled with joy and hope for their first child. But their joy was short-lived as not long after he was born, they realized there was something wrong with his right leg—it was shorter than the left and twisted at the ankle.

Doctors told Rafael’s parents he was born with a very rare physical condition known as Tibial Hemimelia. According to doctors, the congenial orthopedic condition causes the shortening of the tibia resulting in a deformity of the leg affects only one in a million children.

Naturally concerned to have her son to have full, normal use of his leg, Harris said she eagerly sought medical help in Jamaica. But because the condition is so rare in Jamaica, where only three cases were known, not much help was available. She said a group of orthopedic specialists collaborated to observe Rafael’s rare condition, but came to the unfortunate—and for Harris—unacceptable solution to amputate the child’s right leg.

Harris said, “I just could not accept that solution. I was determined to find some way, some medical solution, to help Rafael.” Turning to the child’s pediatrician, she was referred to Shriners Health Center for Children in Tampa, Florida. But on visiting Shriners, they were unable to recommend an alternative to amputation, but fortunately referred the family to the Paley Orthopedic and Spine Institute at St. Mary’s Medical Center in West Palm Beach, Florida.

Among the specialties, the Paley Institute focuses on is foot and ankle deformity. When the team of doctors, including lead doctor Dr. Dror Paley, examined Rafael, they diagnosed a very mild form of TH, which did not necessitate amputation but could be rectified with a combination of corrective surgeries, limb strengthening, and physical therapy.

Harris said on hearing Paley’s diagnosis and treatment plan, “joy swelled my heart as I couldn’t imagine making a decision to cut off my child’s limbs without first seeking a possible alternative.”

She told CNW that Paley’s diagnosis and treatment plan, which requires three corrective surgeries, was made back in November 2016, but came with a price tag of US$250,000.

“Since then, we have tried relentlessly to raise the funds to help with Rafael’s surgeries, but as of now (December 9) have been able to raise only US$17,000. There’s a far way to go, and we are concerned time is running out. We definitely would like Rafael to have the treatment before he grows much older and the surgeries more complex.”

She said although she needs to raise the $250,000, her primary concern is to first raise $130,000 so Rafael could have the first in the series of surgeries and related physical therapy.

Rafael’s parents have tried reaching out to charities to assist with the funding for his treatment but discovered most charities they contacted didn’t offer medical assistance funding for children with orthopedic conditions. Rather, their focus is mainly on heart conditions, kidney dysfunctions, and cancer, which are more common among the pediatric population.

The family is now dependent on raising the required funding through community support, and has, accordingly, set a GoFundMe account https://www.gofundme.com/f/savingrafaelslegcampaign to raise the necessary funds.

Harris says while Rafael awaits the treatment, he remains “in a prolonged state of cheer. The bravery and strength he’s displayed since birth is admired and respected. Although he’s only 5 years old, he possesses a determination and will to thrive despite the challenge. But, he can only hobble along which is damaging to his spine, hip and foot, if not addressed as he’s growing. The surgery would mean to world to us as our baby would gain ability rather than a life-long disability that comes with a myriad of challenges.”

CNW supports Rafael’s parents in calling on the community to support them by making contributions to the GoFundMe account.

As Harris emotionally told CNW, “Time is running out. It has been four years since we have received a favorable treatment plan for correcting Rafael’s TH problem. Please, I humbly urge the community in Jamaica and overseas, if at all possible, to help my child receive these surgeries and physical therapy.”