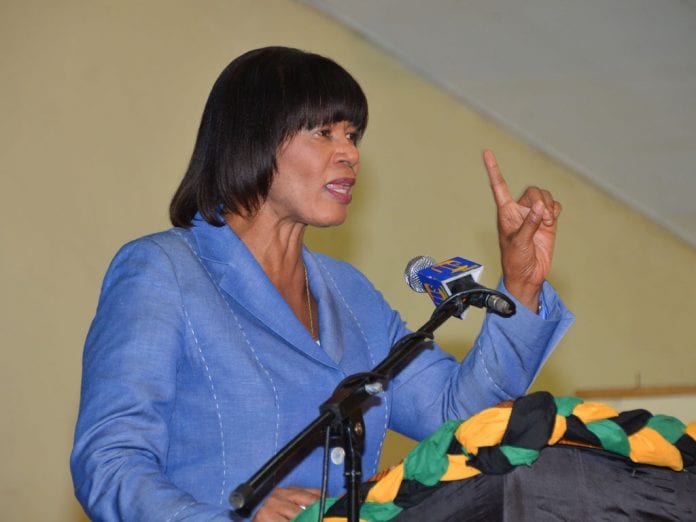 Portia stepping down as leader of Jamaica’s People National Party

Jamaica’s first female prime minister; current Leader of the Opposition and leader of the People’s National Party Portia Simpson Miller has announced she will be stepping down as the party’s president. She made the announcement that she will not be seeking re-election as party president next September to members of the PNP’s National Executive Council meeting on Sunday. She told the members “I will leave you as party leader but I will always be with you.”

Announcement of Simpson’s Miller has received favorable response from several supporters of the PNP, one of Jamaica’s oldest political parties formed by Jamaican National Hero Norman Washington Manley in 1938. Over the past 10 months, the PNP has lost a General Election, on February 25, and a Local Government Election, on November 28, under Simpson Miller’s leadership.

Calls for her resignation have been circling since the general election but Simpson Miller was reelected as party leader at the party’s annual conference after those elections. The calls, including from the party’s youth arm, the Peoples National Party Youth Organization (PNPYO), grew louder after the PNP’s defeat in the Local Government elections.

The Party will now focus on identifying a suitable successor to Simpson Miller, one who can galvanize maximum support from party members nationwide, make the party a formidable opposition party, and prepare it to retake the reign of government when the next general elections are called, which is constitutionally due in February 2020. However, several analysts believe with the ruling Jamaica Labor Party having a majority of only one seat in the Jamaican parliament, the leader of the JLP and Prime Minister Andrew Holness could call elections earlier to try and secure a larger majority.

Meanwhile, the PNP also has a new general secretary. On Sunday, the party’s deputy secretary Julian Robinson, MP for the St. Andrew South East Constituency took over the position of general secretary from Paul Burke who had like his party president, fallen out of favor with a large group of PNP supporters.

Robinson is one of the party members whose name has been touted as a possible successor to Simpson Miller as Party leader. Other names being suggested are former finance minister Dr. Peter Phillips, former national security minister Peter Bunting, former mining and energy minister Phillip Paulwell and former sports and culture minister Lisa Hanna.

Addressing members of the PNP’s National Executive Council on Sunday, Robinson told them “Challenges clearly exist……But as we restore our noble institution to strength and power, we must do so conscious of our movement’s roots, our established principles and the strong foundation upon which we must continue to build.”

Robinson also said that as a party, comrades must “situate our ideology within the context of our current realities, without compromising our core values.” He cautioned the members that “there is much, much work to be done” to return the party to retake the government of Jamaica.