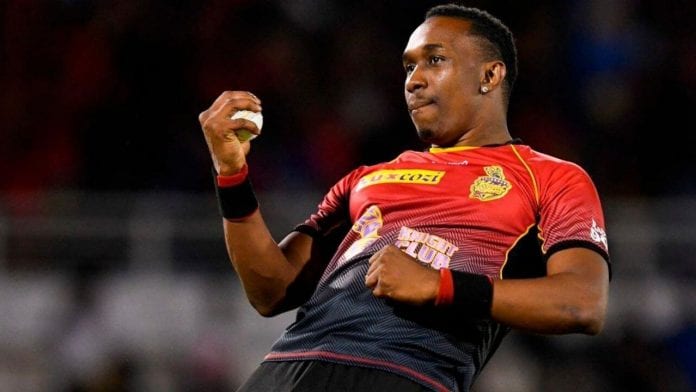 With just the fourth ball of his opening over, the 36-year-old Bravo had Cornwall taken at cover by New Zealander Colin Munro for 18 in the fourth over of the St Lucia Zouks innings, to reach the coveted landmark and also become the first bowler to reach 100 wickets in CPL.

Trinidadian Bravo said reaching the milestone at his domestic club venue where he had played since his childhood had made the occasion even more special.

“It’s been a great journey,” Bravo said after rain halted the Zouks innings at 111 for six after the first ball of the 18th over.

“To be able to achieve [this] right here at home, this is where I started playing cricket at age eight and I can’t be a more happier person to get that 500th here at the Queen’s Park Oval.”

Bravo started the tournament on 497 wickets and picked up one each in his first two games, before disappointingly going wicket-less in Trinbago Knight Riders’ last outing Barbados Tridents last Sunday at the Brian Lara Stadium in Tarouba.

However, the former West Indies one-day captain said he felt under no pressure to achieve the landmark, always believing it was just a matter of time.

And the moment came after captain Kieron Pollard called on Bravo to stem the flow of runs with Zouks humming along at nearly 11 runs per over.

“They got off to a pretty decent start and once again Polly (Pollard) said to me see if I can get an over in in the power-play,” Bravo recounted.

“Cornwall is a very dangerous player. I gave him a yorker, I gave him a slower ball, I gave him a harder yorker again and then I said ‘now I have to go hard length’. And it worked; [he hit it] straight to Munners (Munro).

“I think everyone is happy for me and I’m happy for myself, and my teammates need to take some credit as well.”

Bravo is a member of the well-travelled galaxy of Caribbean T20 stars, having featured in nearly every global franchise tournament including the high profile Indian Premier League and the Australian Big Bash.

All told, he has played 458 T20s, averages just over 24-½ runs per wicket with an economy rate of eight runs per over but says more than the personal accolades, was the desire to always win trophies.

“Being the first to get a hundred [wickets] in CPL, again another great achievement for me personally but what I enjoy the most is whenever I play in tournaments, apart from taking wickets, I win trophies,” he stressed.

“That for me is more important than achieving these personal stats. I think along with Pollard, (Andre) Russell – we’ve won the most T20 tournaments in the world and I think that’s what we play for.

“We don’t just want to play in those leagues and take part; we want to dominate and we want to win.”

Bravo said the quality of his achievement lay in the fact that even though the T20 format was often very difficult for bowlers, he had managed to succeed.

“I enjoy the battle. This is a batsman’s game, it’s designed for batsmen and we bowlers have it very hard, and my position that I normally bowl is at the back end of the innings to some quality players,” he pointed out.

“I accept the fact that I go for runs but as you can see, I also get wickets as well. It’s part of the game but for me to dominate a batsman-friendly game like this, I’m happy.”

Bravo finished with two for seven from three overs on Wednesday to move to 501 wickets.

TKR claimed a six-wicket win under Duckworth-Lewis-Stern after successfully chasing down a revised target of 72 off nine overs.