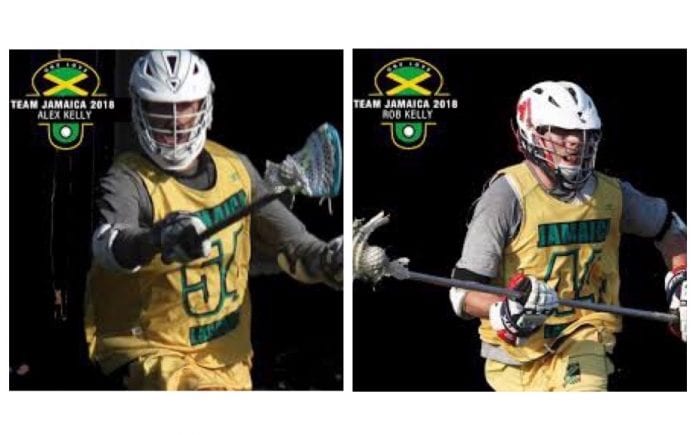 Two Rumson, New Jersey brothers will make history for Jamaica this summer in Israel as they headline the Jamaican National Team roster for the first time on the international level.

This will be the first time Jamaica will have a lacrosse team play at the international level. Rob and Alex Kelly will put the country in the spotlight at the 2018 FIL World Lacrosse Championships in Netanya, Israel.

The brothers claim Jamaican citizenship from their mother, Nicola, who was born, and lived, in Jamaica before relocating to the United Kingdom, according to the Two River Times. It was there she met and married her husband, Kevin Kelly, and where the couple had two sons.

The family ultimately moved to New Jersey in the US,  and settled in Rumson, where the brothers attended Rumson-Fair Haven Regional High School. But every year, they would travel to Jamaica.

“We’ve been going to Jamaica and spending time there pretty much every year since I can remember,” said Rob Kelly, 26, who graduated from RFH in 2010 after three seasons of varsity competition with the Bulldogs.. “And that’s because my mother has always maintained a strong sense of pride in her home country, and it’s something she’s certainly instilled in us.”

“Being able to represent Jamaica in this fashion has made our mother very proud,” Alex Kelly added. “We wouldn’t have this opportunity without her and it goes deeper than citizenship. She’s been instrumental in helping put this team together. From organizing the players and coaches, to the fundraising efforts, she’s basically started a small company and it’s all in the name of Jamaican lacrosse. And when mom’s pulling that much weight, we’d better play well for her.”

The Kelly brothers and their Jamaican teammates, including Hakeem Lecky, Bryan Depass, Mark Dwyer and Matthew Marrett of Nantucket High School, will all make their appearance in one of the most anticipated matches of the international tournament when they play host, Israel, on July 12, 2018 at 4:30 p.m. in the Netanya Stadium.

The 2018 FIL Men’s World Lacrosse Championships will include 48 participating countries and more than 5,000 fans from all over the world between July 12th to 21st.

Calbert Hutchinson is currently president of the Jamaica Lacrosse Association and is fully compliant with the player eligibility rules as defined by the Federation of International Lacrosse (FIL).  The team is raising funds to make the trip possible. A GoFundMe has so far raised some US 18,000 of its US $60,000 goal.