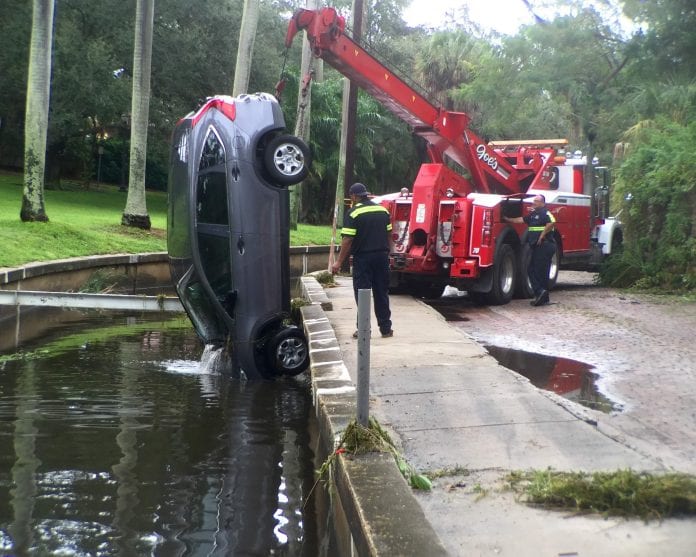 Over the days preceding Christmas and early in the morning following Christmas Day, five South Floridians lost their lives after their vehicles plunged into roadside canals.

The body of a 21-year-old FIU student who was reported missing after visiting in Palm Beach County was found in a Loxahatchee canal on Christmas Day. Two days before Christmas a woman lost her life after her car ran off the I-95 into a canal in Deerfield Beach. On Monday morning,  two young women and a young man drowned in a Fort Lauderdale canal after the car they were being driven in crashed into the canal. Fortunately, later on Monday afternoon, a 30-year-old woman was rescued after making a U-turn on a Davie street and ending up in a canal.

Because of the swamp-like nature of the southern half of Florida, over 1,800 miles of open primary canals flow between Orlando and the Florida Keys. According to Rene Garcia of the South Florida Water Management District, several canals are 15-feet deep, running  parallel to roads and highways. “Canals are an essential part of Florida,” Garcia said. “They help prevent flooding especially during storms and hurricanes. They also contribute to the region’s residential spread, as they drain swamplands, allowing housing and commercial development to take place.”

“However, these same canals, so essential to South Florida’s development, can become death-traps for motorists,“ said Alex Gomez a former Florida Trooper. “Over the years, tens of motorists have lost their lives by driving off the roads into adjacent canals. Too often, motorists speed on roads they are unfamiliar with, especially at night, and make the wrong turn into a canal.”

Gomez says they are often more canal-related accidents than reported in the media.  He said there are over 1,500 traffic accidents in Florida each year involving canals, lakes or other waterways. “Moreover, there have been cases where motorists go missing for some time, only to be found when divers enter canals to clear them.” He gave account of a 1997 case when the remains of five teenagers who were missing from 1979 were discovered in a van in a Boca Raton canal.

Gomez also said while Florida motorists are advised to exit a vehicle immediately if it runs off into a canal, “this is  often not so easy. At night the water in canals are very dark. Usually people in sinking vehicles become  disoriented and can’t exit them. Because of the prevailing threat of canals, South Florida motorists are advised to have an exit plan, in the unfortunate event they drive into a canal.” He advises motorist to keep a  “tiny but effective steel tool” called a center punch to break their car windows and exit the vehicle quickly. “A vehicle can sink to the bottom of a canal in less than a minute,” Gomez said.

The center punch is available at hardware stores like Home Depot and Lowes.

“However, the best advice to motorists is to be aware of  roads they are travelling  on and take extra caution. Use less speed when driving on roads adjacent to canals,” Gomez said.