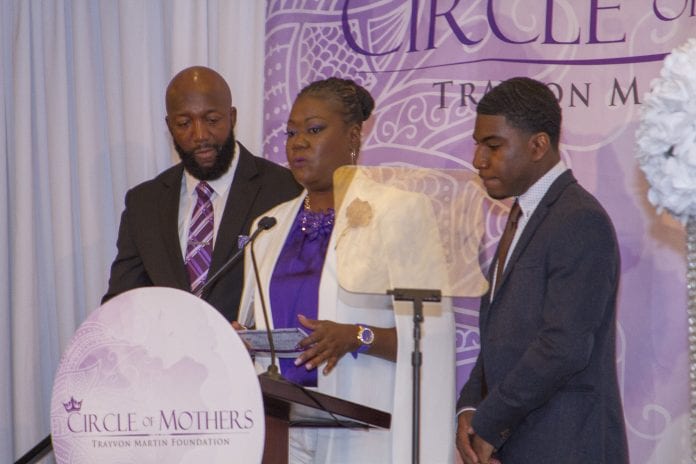 Mothers rally with Fulton and Clinton against gun violence

Hundreds of South Floridians gathered to rally against gun violence at this year’s Circle of Mothers conference in Fort Lauderdale, as current Democratic presidential candidate and conference keynote speaker, Hillary Clinton, asserted her support for reform.

“We must do something about gun violence that stalks communities and terrorize families,” said Clinton during her speech at the recent conference Gala, hosted by Sybrina Fulton, President/CEO of the Trayvon Martin Foundation (TMF), founded in memory of her late 17-year-old son who was a victim of gun violence. “We have a moral obligation to protect our children, no matter what zip code they live in.”

Founded by Fulton and Trayvon’s father Tracy Martin, the conference seeks “to enable mothers who lost their children to gun violence to return and empower their communities, showing that they won’t be devastated by their heartache and pain, but are returning to help build safe communities,” said Tracy Martin in an interview with National Weekly.

The conference included workshops with professionals and public officials offering guidance for mothers on personal restoration. But the conference also serves as an opportunity for mothers to establish both local strategies and a national agenda in combating gun violence.

The cause is a personal one for Circle of Mothers member, Queen Thompson Brown who lost a son to gun violence in 2006. Brown called on the community of mothers to “become change agents, where we promote common sense gun laws.”

For journalist and national commentator Michaela Angela Davis, gun violence has become an issue concerning every mother “wonder[s] if their child is going to get shot on their way to and from school and church.” Davis said she endorsed Clinton’s views that “we have to protect our children first. If we can’t do that nothing else matters.”

Hours before The Circle of Mother gala, some 400 people also gathered to participate in a 5K walk in at the Koinonia Worship Center and Village in Pembroke Pines to “let people understand the fight against gun violence begins with the community,” according to event coordinator Melanie Wells.

The Sons of Allen, the men fellowship of the Mount Hermon African Methodist Episcopal Church in Miami Gardens, also held a retreat and a march through the community to “make a statement against the prevalence of gun violence.”

The march seeks to “give hope to young black and brown men that their community is partners with them, and is encouraging them in their lives,” said The Reverend Kenny Irby. The pastor of Mount Hermon, Michael K. Bouie, said the retreat and march made a “powerful statement that the community is vigilant against gun violence.”