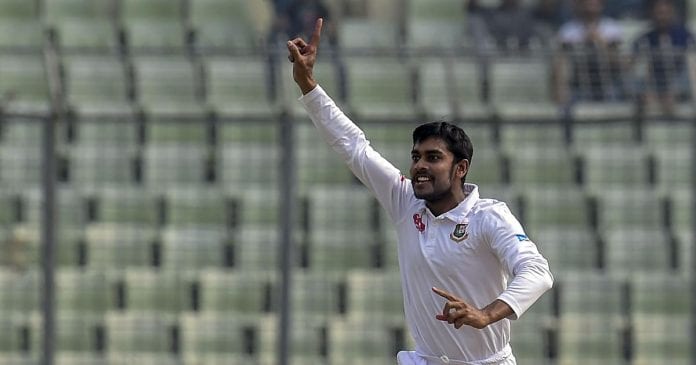 Mehidy Hasan Miraz produced the best bowling performance ever by a Bangladesh bowler to bowl his side to victory in the second Test and claim a historic series win over the West Indies.

Mehidy tore through the Windies’ middle order on his way to grabbing seven wickets in the first innings and then returned to wreck more havoc, snaring five more wickets in the second innings, to finish with the remarkable figures of 12 for 117.

His showing allowed the hosts to complete a memorable and momentous innings and 184-run win over the West Indies, their largest ever margin of victory in a Test match.

So dominant were Bangladesh’s spinners in this two-match series that they accounted for all 40 West Indies wickets to fall.

It was the first time Bangladesh had defeated the West Indies on home soil and only their fourth Test series win in history and first since 2014.

The writing was on the wall for a huge Bangladeshi victory at the end of the second day with the Windies struggling on 75 for five in reply to the home side’s mammoth first innings total of 508.

Mehidy, who had claimed three of those scalps, continued from where he left off.

He was responsible for breaking the 57-run partnership between Shimron Hetmyer and Shane Dowrich – the only form of resistance in the Windies’ first innings- when he induced the former to play down the wrong line to have him caught and bowled for the top score of 39.

Devendra Bishoo made just one before he became Miraz’s fifth victim, driving the spinner straight into Shadman Islam at silly point, who took a spectacular reflex catch as the Windies slipped to 88 for seven.

Kemar Roach tried to launch him out of the ground but only picked out Liton Das at long on and then Miraz trapped Dowrich leg before wicket for 37.

Skipper Shakib Al Hasan then rounded off the innings when he had Shermon Lewis out leg before wicket.

Asked to follow on after trailing Bangladesh by a massive 397 runs, the West Indies found themselves on the back foot from the very first over.

Windies’ captain Kraigg Brathwaite’s torrid run of form in the series continued when he played down the wrong line of a looping delivery from Shakib and was out plum leg before wicket for one.

Opener Kieron Powell’s struggles also continued, as having been giving a lifeline after he was dropped by wicket-keeper Mushfiqur Rahim early on, he waltzed down the track and completely missed a turning delivery from Mehidy to be easily stumped for four, as the Windies slumped to 14 for two.

Taijul Islam then made it 23 for three when he trapped Sunil Ambris leg before wicket with a delivery that kept low and skidded on and Roston Chase only scored three before he drove Taijul into the diving hands of Mominul Haque at short cover to make it 29 for four.

Shai Hope and Shimron Hetmyer then tried to repair the damage during a fifth wicket partnership that yielded 56 runs.

Hetmyer was his usual aggressive self, smashing Mehidy over the long on boundary for six as the Windies went to lunch on 46 for four.

But when it looked as though the pair had weathered the storm, Hope hit Mehidy into the hands of Shakib at short midwicket to be out for 25.

Hetmyer proved to be the lone bright spark, his 93 coming from just 92 balls as he took the attack to the spinners. He also struck nine sixes, which equalled the most ever in a Test innings by a West Indies batsman.

Bangladesh, however, continued to strike regularly, with Nayeem Hasan accounting for the wicket of Dowrich for three and Mehidy dismissing Devendra Bishoo for 12 to leave the Windies on 143 for seven.

By the time Mehidy accounted for Hetmyer, seven runs short of a deserved century, the outcome was already sealed, with only a fighting unbeaten 37 from Kemar Roach and 20 from Shermon Lewis delaying the inevitable.