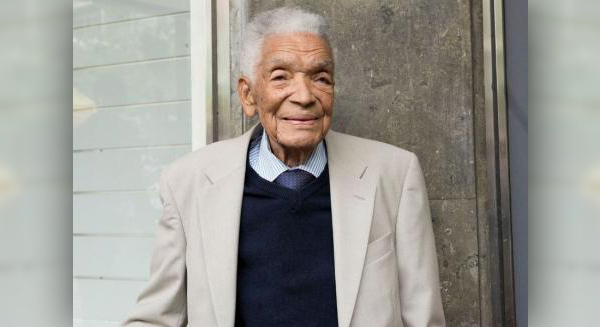 Cameron, the youngest of six children who grew up on Princess Street in North Hamilton, not far from the old Colonial Opera House, was one of the first black performers to break into mainstream British entertainment.

Known for his relaxed manner and laid-back approach to fame, Cameron was appointed a Commander of the Most Excellent Order of the British Empire (MBE) in 2009 for his accomplishments, which included being the first black actor to star in a British feature film.

Cameron was inducted into Britain’s Screen Nation Hall of Fame in 2016, the veteran having been honoured in his homeland four years earlier when the Hamilton City Hall theatre was named after him.

“At a time when the whole world is examining the history of people of colour, Earl Cameron’s life and legacy makes us pause and remember how he broke barriers and refused to be confined to what his humble beginnings may have dictated as his path,” Burt said leading the tributes to a son of the soil who achieved international fame.

Calling him “a pioneer from Princess Street”, Burt said “this iconic actor was a proud son of Bermuda whose constant, dignified presence added to stage and screen over decades.

“All Bermuda joins with me in celebrating his long and remarkable life.”

Cameron’s career was launched in 1951 by the film Pool of London, a classic thriller — but never shown in his home country. Bermuda snubbed it in part because it was the first British movie to show an interracial relationship.

Cameron told the Royal Gazette newspaper in 2018, “to be honest, it didn’t strike me as breaking ground on the racial issue.

“Coming from Bermuda in 1939, which was a very racist island, the degree of racism in England didn’t surprise me. I had grown up with it.”

His father, a stonemason, died in 1922, and his mother took a series of hotel jobs to support the family.

Cameron held a series of jobs, selling newspapers and working on the ocean liners that brought visitors to the island from New York, as a young man. But his life changed in 1939 after he joined the British Merchant Navy.

He arrived in London on the eve of the Second World War and ended up stranded. Cameron scraped a living with a series of low-paid jobs in wartime London until his acting career started almost by accident.

“When I arrived in London, I had no qualifications for anything,” he recalled two years ago, adding “it was a period when it was almost impossible for a black person to get any kind of job.”

But his fortunes took a dramatic turn for the better when he went to see a friend who was in the cast of Chu Chin Chow, a West End show, when he was working as a dishwasher at a  restaurant in the city’s Strand.

He asked his friend if he could have a part in the production after he noticed several black actors in the cast.

“He said, ‘No way’. The show was cast but strangely enough three weeks later he came by late one afternoon and said my big chance had come. He said a guy on the show hadn’t shown up. It was the third time he had missed a matinee, so the director said to get someone else, Cameron recalled.

Cameron made his debut in the chorus that night and never looked back.

But he admitted: “my knees were trembling before I went on, the sweat was pouring out, and I had never been on a stage before in my life. But it still beat washing dishes.”

He returned to Bermuda after the war. However, just five months later he was back on a ship, heading to New York and then to London, where he won a role as an understudy in the play Deep are the Roots.

After his breakthrough in Pool of London, he landed roles in films such as Simba with Dirk Bogarde and Safari with Victor Mature, and also appeared in Tarzan movies.

Cameron also appeared in cult TV shows such as Danger Man, Doctor Who and The Prisoner in the 1960s.

Cameron went on to star with actors such as Sean Connery in the fourth James Bond movie Thunderball, set in Nassau, and Bahamian Sidney Poitier — a good friend — in the 1973 film A Warm December.

Cameron’s most recent screen appearances included a cameo role in the 2006 film The Queen, with Dame Helen Mirren; the 2010 film Inception, and a role as “grandad” in the short film Up on the Roof in 2013.

Cameron, a father of five, was a devoted member of the Bahá’í faith, which he joined in 1963. His faith also took him to the Solomon Islands in the Pacific with his family to assist the Bahá’í community there.

The Camerons left the Solomons in 1994, just before the death of his first wife, Audrey, from breast cancer.

He lived in Warwickshire in the English Midlands with Barbara, his second wife.