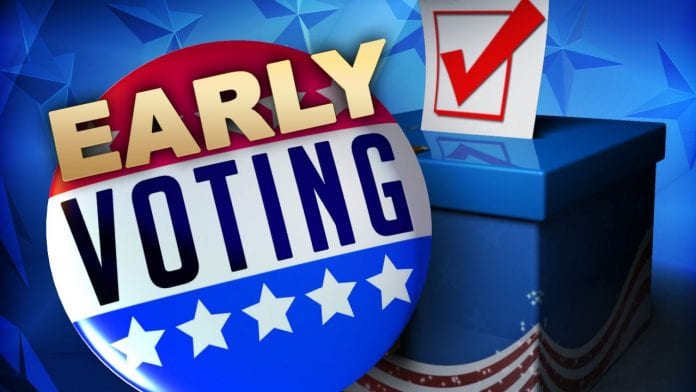 Across South Florida, Miami-Dade, Broward, Palm Beach, people are turning out in large number to cast their vote since early voting commenced at 7:00am on Monday Oct 22.

Veteran polling officers at polling places at libraries in South West Miami and Tamarac, Broward County, who have been working at early polling sites for the past 20 years said they never seen so much voters voting early in a mid-term general election.

“This is very similar to the record voter turn out in the 2008 general elections when Barack Obama was on the presidential ballot in 2008* Said the polling officer at the South Miami Library.

Votes have doubled and tripled

Visiting the early vote at the West Kendall Regional Library on Monday there was a sudden rain storm but that did not deter people from dashing from their cars to the library in the pouring rain to cast their votes.

West Kendall resident Larry Coker loaded his SUV with his wife, mother in law, mother, and three teen- aged kids to vote on Monday. He told CNW the family had originally applied for ballots by mail, but when he called the Miami-Dade Supervisor of Elections office last week he was told  the ballots wouldn’t be mailed until October 22. He then decided instead to take advantage of early voting. “I just don’t want to risk not voting early. These are very serious times in America. Anything weird can happen any day, so I want to make sure my vote is in. If we want change we must vote”

According to political pundits, a heavy voter turnout favor Democratic Party candidates. “People turn out to vote when they are dissatisfied with the status quo and want change. Satisfied citizens are not anxious to vote “ said Miami political analyst and political science lecturer, Bruce Dally.

Based on the latest data on voter registration in the three counties, there are 1,497,662 registered Democrats; 988,649 registered Republicans and 1,043,656 people register as having no party affiliation (NPA). Dally said based on this data, “It therefore follows that a heavier than usual turn out of voters augers well for Democrats, and this is boosted if it’s assumed voters without party affiliation are also voting for Democratic candidates.”

Further enquiry at several poling places in the there counties on Wednesday indicated up to mid-day on Wednesday voting has continued at a heavy pace,  particularly between 4pm and 7pm each day. It’s estimated approximately 2 million votes have been cast in in Florida up to Wednesday.

Brenda Snipes, Broward County Supervisor of Elections confirmed that voter turnout so far has been higher than in 2014. She cautioned voters to carefully study the ballot as they vote, as this year the ballots are longer with the inclusion of 12 constitutional amendments. .

From what CNW observed at the polling place visited, voting, though brisk, has been taking place without negative incidents.

Dally cautioned neither party “should relax their effort from the turnout in the first few days of early voting. This is a long, two-week, process including early voting, mail-in votes, and, of course Election Day. Any kind of political wave, blue or red, requires consistent heavy turnout of voters every day.”

Early voting continues in South Florida until Sunday November 4, from 7:00am to 7pm daily. Voters can vote at any early-voting polling place in their county during this period. On Election Day November 6, voters are restricted to vote only at their designated polling place.