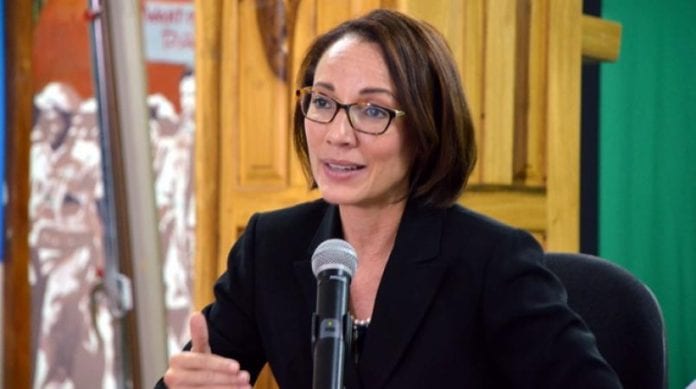 KINGSTON, Jamaica,  CMC – Foreign Affairs Minister Kamina Johnson Smith, has called on Jamaicans who work or travel overseas, to register with the country’s Missions so that they can be easily located in the event of an emergency.

Johnson Smith, who was speaking in the Senate on Friday in the aftermath of the recent devastation of several islands in The Bahamas by Hurricane Dorian, said efforts are continuing to reach the estimated 8,000 Jamaicans in the country.

“When you travel, register at the Missions of Jamaica in the country where you are either travelling, living or working. Register with the Honorary Consul, the Embassy or High Commission, so they know that you are there.”

She argued that while some persons register at the various overseas Missions, the Bahamas experience, where communications are down, calls for a formal process of knowing where Jamaicans reside so that the Government can help in assisting family members at home to ascertain the safety of their loved ones more speedily.

“We are looking at creating a formal template, and to work with Caribbean airlines and travel agents, to help outgoing persons to be more conscious because whenever there is a national disaster, the ability to make contact with you is very important,” she told the Upper House.

Johnson Smith, who is also the Leader of Government Business, said while the Administration is actively promoting national and private efforts to support The Bahamas as they recover from the dislocation caused by the hurricane, it is also “making efforts” to support the Jamaican community there.

She pointed out that Jamaica’s Honorary Consul in Nassau, Terrel Butler, is closely monitoring persons who have contacted the ministry, and coordinating relief efforts with Jamaicans on the ground, and identifying those who have been impacted by the storm.