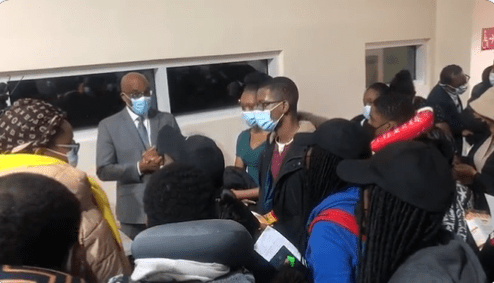 The Jamaican medical students who had to return home from Ukraine can matriculate to the University of the West Indies (UWI). Still, they will have to cover the total cost of their tuition and other requirements.

UWI Campus Registrar Dr. Donovan Stanberry said discussions are ongoing with the Ministry of Foreign Affairs. However, the students will be required to pay tuition fees to continue their studies. Additionally, issues relating to course enrollment will have to be sorted out on a case-by-case basis before students are granted admission.

“Preliminary discussions have been had between the university and the Ministry of Foreign Affairs in terms of the possibility of the university accommodating those students.

“The issue of the fees would remain because we are not in any position whatsoever — sympathetic as we are to those students — to admit them in our system without paying the full fees,” Stanberry said.

He noted that there are about 55 students who receive a government subsidy, “but all of those spaces for the current financial year have already been allocated, and we just don’t have the wherewithal to offer any concession.”

Several concerns have been raised about how the students will further their studies considering that medical school in Ukraine is more affordable than Jamaica. The UWI tuition for medicine is US$28,000, and when subsidized by Government, it decreases to US$5,800 yearly. Meanwhile, in Ukraine, the tuition for the entire program ranges from US$3,500 to US$5,000.

Stanberry also said the placement of students would be done based on an analysis to determine if the medical courses done in Ukraine are equivalent to what is offered at UWI.

“We have a list of the students, and we have been able to determine their CSEC (Caribbean Secondary Education Certificate), and CAPE (Caribbean Advanced Proficiency Examination) passes, and by virtue of that, we have been able to determine that most of them would have normally matriculated here in our program and, indeed, quite a few of them had applied here and were even made offers to do medicine,” Stanberry said.

Outlining an example of the procedure for students to be accepted, he said, “But let us say that ‘John Brown’ has completed two years in Ukraine, we would have to determine where in our system to place John Brown, and in order to make that determination we would need a transcript for him outlining the courses that he would have completed and in what grade.

That kind of clinical determination would have to be made in respect of each student, and that would now tell us where in our system we could place the students. Would they be exempt from year one substantially but still carry a few year-one courses if we have courses in our year one program that they didn’t do in Ukraine?”

Asked if there were problems with the availability of space for the students, Stanberry responded, “At this point, no.”