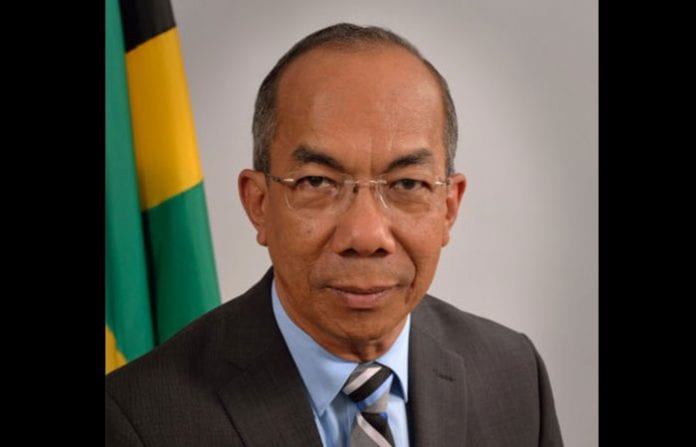 Jamaica’s National Security Minister Dr. Horace Chang has assured members of the United States Diaspora that the government is going all out to stem the illegal trafficking of guns and ammunition into the country.

Addressing some two thousand members of the North America diaspora at the second in the series of “Lets Connect with Ambassador Marks” an online town hall meeting on Thursday, April 8th.2021, Dr. Chang explained that the government was now looking at a more robust legislative framework to deal with crime.

He said “although some come in through the United States, others come in through Central America and Haiti and they are exchanged for drugs. What we have done so far is very costly, but we have retooled the entire Coast Guard, creating a Marine, Air and Cyber Security division called the MACS Brigade, commanded by a senior female officer, Commodore Antonette Wemyss-Gorman.”

“We have acquired three ocean-going vessels, and a marine patrol aircraft which have been very effective in intercepting the boats at sea, and stemming the guns for drugs trade,” Minister Chang said.

He advised that the government will be implementing a more robust legislative framework to punish those who engage in illicit gun trade, as 80% of the homicides are committed from firearms .

The National Security Minister pointed out that “we are in the process of having a new Firearms Act Which will increase penalties for not only illegal possession and use of firearms, but also trading and manufacturing. We are looking at a number of other pieces of legislation so we can have a more robust legislative framework in dealing with crime,” He said.

He noted that another area in which the government was embarking was to engage the youths who were considered ‘at risk, by keeping them in school, and giving them a skill, which was crucial in the effort to curtail and deter gun culture.

In a well-received presentation, Dr. Chang committed to giving a regular briefing to members of the diaspora, as he felt it was important for Jamaicans overseas to be kept informed about the progress the government was making as it relates to national security.

Dr. Chang urged overseas Jamaicans with security skills who wanted to make a contribution to the national crime-fighting effort, get in touch with the police high command through the Jamaican embassy, which will make the appropriate arrangements.

He acknowledged that while the police had highly skilled and capable officers, the government could not do it alone, emphasizing that national security was a specialized and highly sensitive area that had to be approached with caution, but he was open to explore roles for diaspora expertise.