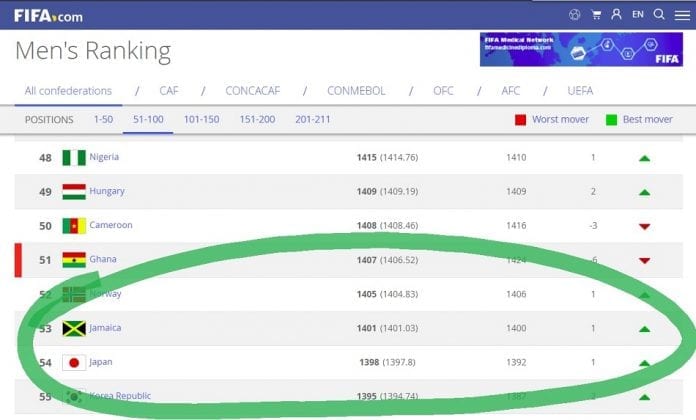 Jamaica has moved up one place in the latest FIFA/Coca Cola world rankings released yesterday.

The Reggae Boyz who defeated the Cayman Island 4-0 in their latest match up in the CONCACAF, Nations League at the National Stadium on September 9,  inched up a place from 54 to 53 to remain the number one ranked Caribbean team and fourth in CONCACAF.

Mexico leads CONCACAF after stepping up a place to 15th overall, ..above second place the USA at 22  with Costa Rica third after slipping five places to 37.

In the meantime, FIFA world cup third place winner Belgium have joined world champions France as joint leaders of the rankings, the first time in the table’s 25-year history that top spot has been shared.

The rest of the top five remains unchanged with five time world champions Brazil third in the world, above beaten world cup finalist Croatia in fourth.