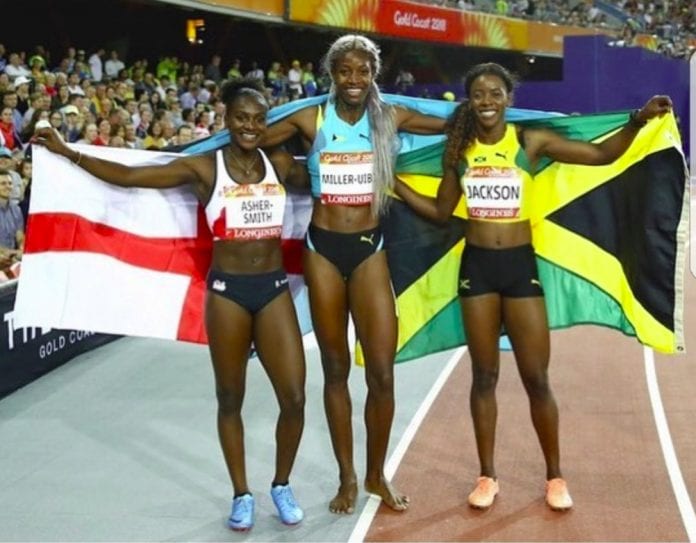 Caribbean athletes continued in their medal winning ways at the 2018 Commonwealth Games being held at the Carrara Stadium in Gold Coast, Australia.

In competition on Thursday, Shaunae Miller-Uibo of the Bahamas took the gold medal with a time of 22.09s in the women’s 200m. Jamaica’s Olympic Champion Elaine Thompson failed to medal. However, another Jamaican sprinter, Shericka Jackson secured silver in the event with a personal best of 22.18s. The bronze medal went to England’s Dina Asher-Smith (22.29), who pipped Thompson by 0.01s. The other Jamaican in the race, Sashalee Forbes, was disqualified.

Ronda Whyte and Ristananna Tracey, the other Jamaicans in the final, were 4th and 8th with 55.02 and 57.50 respectively.

The Caribbean made a clean sweep in the men 400m hurdles. Kyron McMaster of the British Virgin Islands won the gold medal in 48.25 secs, while Jeffery Gibson of the Bahamas won silver in 49.10 secs and Jaheel Hyde of Jamaica the bronze in a time of 49.16 secs.

The top three in the women 200 meters were presented with their  medals by Jamaican sprint icon Usain Bolt. Gold medalist Miller-Ubio told reporters “It was a pleasure getting it from a great like him.”