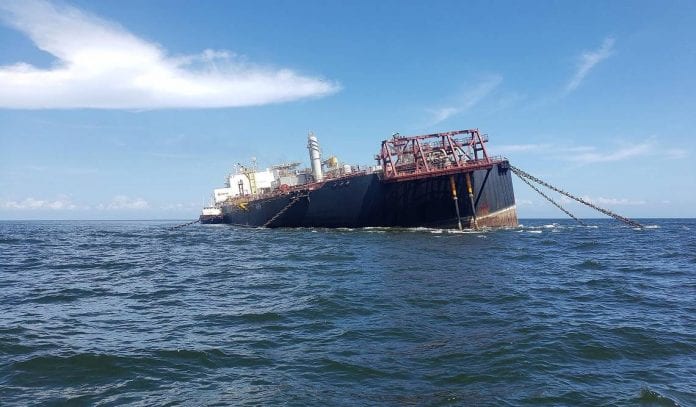 The Trinidad and Tobago Government says it has been engaged in “consistent action” with Venezuela after receiving reports that there had been tilting of the Venezuelan oil storage vessel, the FSO Nabarima in the Gulf of Paria.

“Our Government maintains its concerns about the threat to the environment and continues to seek the best for our people in this matter. Our expert inspection team is ready to proceed and we continue to press for access to the FSO Nabarima as soon as possible,” the Ministry of Foreign and Caricom Affairs said in a statement.

Port of Spain says it has “consistently utilised all available channels to press for verification of the status of the vessel.

“The Ministry of Foreign and Caricom Affairs, the Ministry of Energy and Energy Industries, and the Ministry of National Security have all been actively working on solutions to the Nabarima issue,” it said, adding that the Venezuelan Government has indicated that the vessel was indeed tilting some time ago, but emphasised that they had conducted initial stabilisation works on the vessel and that it is no longer in any danger.

But the ministry said that the Government “immediately sought actual verification of this” and that it has engaged “via repeated and consistent communication, including multiple notes verbales sent to Venezuela on the matter, with persistent efforts to achieve access to the vessel in order to make our own determinations.

“The Venezuelan Government then agreed to permit a team of our experts to cross the border and assess the Nabarima, but subsequently shifted from an initial position that this could be done by the end of September to their current position that the inspection team would receive permission to visit on 20th October.”

The Ministry of Foreign and Caricom Affairs said that without such permission, “our officers cannot cross the border and approach or access any Venezuelan asset”

It said that on Thursday, the Venezuelan ambassador “categorically described a new photograph being locally circulated on social media, which purports to represent severe tilting of the Nabarima in October, as total propaganda.