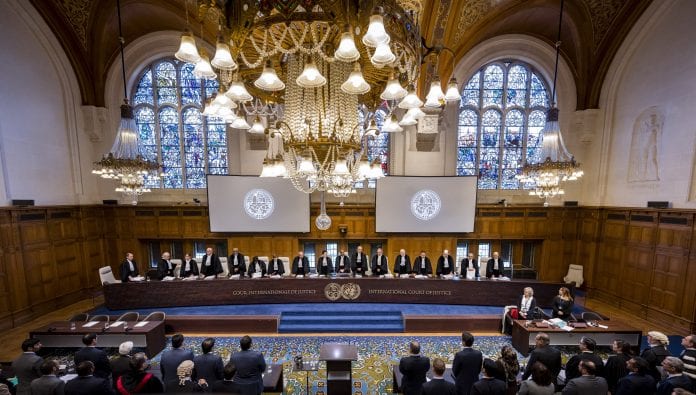 The International Court of Justice (ICJ) will this week rule whether or not it has jurisdiction in the border dispute filed by Guyana against Venezuela, which is seeking to confirm full legal validity of the 1899 Arbitral Award which established the international boundary between the two countries.

The ICJ said it will hand down the ruling on December 18. It said the decision will be read by the Court’s President, Justice Abdulqawi Ahmed Yusuf at a public sitting next Friday.

Former Commonwealth Secretary-General, Sir Shridath Ramphal had led the Guyana team of lawyers who outlined the country’s case on June 30.

Sir Shridath, a former attorney general in Guyana, had argued that Guyana’s collective patrimony is at the very center of the case and the people of Guyana are united in the defence of the sovereignty and territorial integrity of their homeland.

Guyana has maintained that it has no doubt that the Court has jurisdiction to resolve the controversy that has plagued its relations with Venezuela and undermined its ability to develop its sovereign territory and natural resources.

But Caracas has maintained its claim to 70 percent of Guyana’s territory, arguing that the 1899 arbitral award which determined the boundaries between the two countries is null and void.

The border dispute went before the ICJ after United Nations Secretary-General Antonio Guterres on January 30, 2018, announced that he was referring the matter to it for a final and full settlement. But Venezuela argued that the Secretary-General was not correct in taking the decision, saying that it wanted talks to continue between the two countries.

The South American country has also argued that the ICJ has no jurisdiction and did not participate in the oral hearings in June.

On November 28, 2019, Venezuela submitted a 56-page memorandum to the court, accompanied by a 155-page annex setting out the basis for its objections to the court’s jurisdiction.