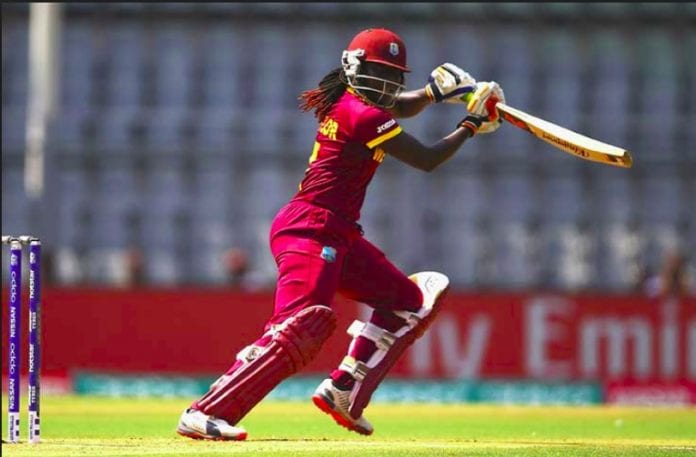 Chasing an imposing 186 for victory under lights at Bay Oval, the Caribbean side’s batting collapsed yet against to leave them well short of their target at 79 for eight off their allotted 20 overs.

Kyshona Knight top-scored with 20 and was just one of three in double figures as the innings never got going, after losing a cluster of wickets up front.

Earlier, the hosts piled up 185 for three off their 20 overs after being sent in, with Amy Satterthwaite hammering an unbeaten 71 and wicketkeeper Katey Martin stroking 65.

They were given a steady start by Devine and captain Suzie Bates who put on 33 off 26 deliveries for the first wicket.

Devine, dropped at point by Hayley Matthews off speedster Shamilia Connell off the first ball of the match, struck 27 from 21 balls with three fours and a six while Bates made 14.

Connell got the breakthrough when Bates dragged on a cross-batted heave in the fifth over and Devine followed in the seventh, holing out to Matthews at long-on off seamer Akeira Peters on 52 for two.

The Windies joy was short-lived, however, as Satterthwaite and Martin combined in a 124-run, third wicket stand to put New Zealand in command.

Faced with staging their highest-ever successful run chase, the Windies crumbled under the pressure and lost early wickets.

Matthews, coming off a half-century in the opening match, failed to find the same touch and perished in the second over for five with the score on 11, cutting a long hop from off-spinner Anna Peterson to Amedia Kerr at point.

The Windies suffered a massive blow in the next over when their captain and in-form batsman Stafanie Taylor fell for one, lofting a full-length delivery from speedster Lea Tahuhu to Kerr at mid-on with just three runs added.

Deandra Dottin (13) attempted a counter-attack, clearing the ropes at square leg with Tahuhu in the same over before launching Devine for a massive six over long on in the following.

But Devine struck twice in the fifth over, removing Dottin lbw and two balls later, claiming Reneice Boyce without scoring, gloving a lifter to Martin behind.

Rocking on 30 for four, there was no recovery for the Windies as wickets continued to tumble while the runs dried up.

Veteran Merissa Aguilleira, who opened the batting, spent 20 balls over 16 before she was caught at the wicket on the second attempt, driving at Kasperek in the eighth over with the score on 42.

New Zealand’s bowlers continued to strangle the Windies, with 15 runs trickling from the next 33 deliveries before Britney Cooper (5) tried to clear the ropes with Kasperek in the 14th and as taken at deep long on by Satterthwaite.