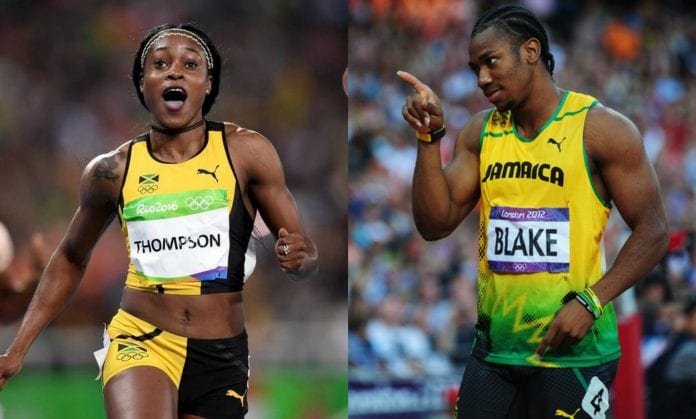 Thompson recovered from a moderate start to rein in training partner Christania Williams and pull away for an emphatic win.

“The plan was to come out here and just go through the rounds, take it step by step, and even though we got some rain I just got the job done,” Thompson told Reuters.

“As I know the season is very long, so I just have to take race by race.

“The focus is on the world championships, so in due time the fast times will come,” she added.

Thompson’s time improved on the year-best she set in Shanghai last month.

Simone Facey had a poor start but closed quickly over the last 30 metres to be runner-up in 11.04, just clipping Jura Levy for second.

Men’s former 100m world champion Yohan Blake recorded a season-best 9.90 to capture the national title in the absence of Olympic champion Usain Bolt, who decided to skip the meeting as he prepares for his world championships farewell in London.

Blake, who won 100m and 200m silver at the 2012 London Olympics, recorded his fastest time since logging 9.69 in 2012 and said his confidence was back after years of hamstring problems.

Julian Forte, who clocked a personal best 9.99 to win his semi-final, was runner-up in 10.04, with Senoj-Jay Givans third.

Asafa Powell, who has been nursing tendonitis, failed to report for the final after posting 10.15 in his semi-final.

There was an upset in the women’s 400m hurdles when the little-known Ronda Whyte produced a late burst to win in a career best 54.28, edging runner-up Ristananna Tracey and third-placed Leah Nugent.