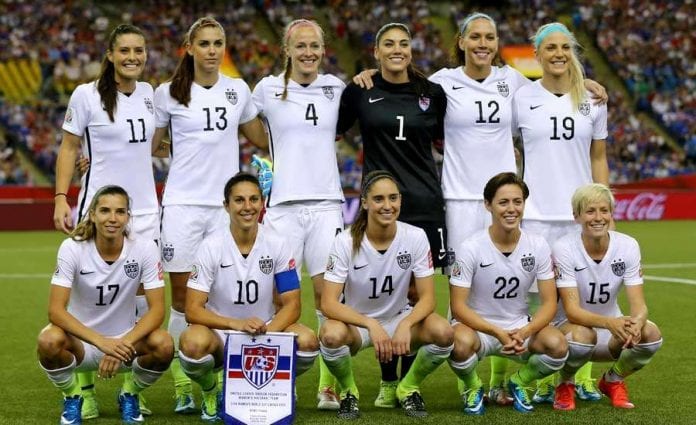 MIAMI, Florida – There is increasing evidence in America, the Caribbean and globally that to label women as the “weaker gender” is becoming outdated. Therefore, the pay gap needs to be closed and women should be paid what their equal dues.

The national women soccer team demolished their opponents on their way to winning the FIFA Women World Cup. While these women captivated television audiences nationally and globally, the US male soccer team struggled to remain relevant in sports news as they failed to defend their championship in the CONCACAF Gold Cup.

A 15-year old African American, Cori “Coco” Guaff became the youngest woman competitor to play at the iconic Wimbledon tennis tournament in the last 40 years. She stunned the tennis, and rest of the world to advance to the vaunted Round of 16. In her remarkable feat, she defeated professionals, including her heroine Venus Williams, ranked several places ahead of her.

In politics, with 102 women sitting in the US House of Representative and 25 in the US Senate, there are more women serving in the US Congress than any time in history.

Also, making history are the six women included among some 24 candidates seeking to be nominated as the Democratic Party’s presidential candidate in 2020. Two of these women, Caribbean-American descendant Kamala Harris and Elizabeth Warren are currently in the top tier of five candidates leading in the Democratic Party polls.

In addition to the achievements of these women in the arenas of sports and politics, women all over the world have been making achievements in various areas giving lie terming them as the weaker gender.

Nonetheless, despite women proving they can play and excel in the same games men play and can lead as well, or better than, men in politics, business, and most professions women continue to be discriminated against and is continuously struggling to have an equal place as men.

Women globally continue to fight against domestic and sexual abuse, and for their rights to be respected by men. In some countries, women are forced to cover their entire body, except their eyes, appearing in public, and do not dare speak out in their home, much less in public.

In America, women are fighting to have control over their very bodies, as several states pass laws to control their reproductive rights.

And, globally women continue to fight to be paid equal salaries and wages as men, despite performing the same jobs and tasks.

It appears both absurd and overtly discriminatory that even as America hail the recent accomplishment of the women soccer team, the team is locked in an impasse with US soccer officials to be paid the same as the men national team.

This discrimination in salaries and wages paid between men and women is a national issue, despite national laws that call for equal pay between the genders.

It pains to read and listen to commentary from men, including from the Caribbean, who defend not paying women soccer players the same as men by claiming “: Men’s physical superiority leads to greater quality of play and, consequently, greater popularity.”

It remains a fact of human physicality than men are stronger than most women, but to argue that women playing and excelling in a sport, or any other area, should be paid less than men is blatant gender discrimination, or, more bluntly, sexist.

This is the same discriminatory reasoning that exists in Jamaica and other countries where some women sports team like women soccer teams are given relatively little financial support even by government authorities, compared to men.

The real bottom line is women, are playing soccer, creating spectator interests, and drawing attention to the countries they represent, as well as, and in some instances better than men.

In American politics, the only reason why a woman has not yet broken the glass ceiling to lead the country as president is her gender. Even with six competent women seeking the presidency in 2020, there are men, and, ironically women too, who because of their gender bias are not willing to clear the path to support the election of any of these women.

The argument that women are the weaker, and by extension, the less capable, gender who should be paid less, and marginalized against leadership, is blatantly wrong, outdated and ridiculous.  Societies that continue to uphold this archaic philosophy do so at their own peril. If the male sector in these societies listens carefully thy will realize the footsteps growing louder following them are the footsteps of women coming forcibly to replace them.