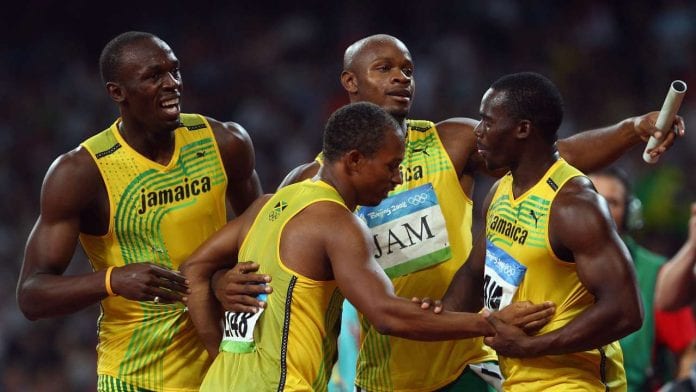 Team Jamaica Athlete Nesta Carter has reportedlyfailed a ‘doping’ re-test from 2008. The Jamaica Olympic Association (JOA) said in a statement that it had received notification from the International Olympic Committee (IOC) that one of its competitors had returned an adverse analytical result but did not name the athlete. Speculation began and sources confirmed, however, that it was not Usain Bolt

The JOA said results management protocols require that they “maintain confidentiality of the result of all doping controls and the identities involved in the proceedings until it has been determined in a hearing”.

Sources said traces of Methylhexanamine were discovered in Carter’s “A” sample, part of a batch of 454 from the 2008 Beijing Games that the IOC ordered to be re-tested.

If found guilty of doping, Carter could face sanctions, should his “B” sample also tests positive.

Neither Carter, who won the 4×100 meters relay along with compatriots Usain Bolt, Asafa Powell and Michael Frater in Beijing, nor his agent replied to repeated requests for comment.

Reportedly, Methylhexanamine has been on the World Anti-Doping Agency (WADA) Code prohibited list since 2004 although it was reclassified on the 2011 list only as a “specified substance”.

The IOC program revisits samples using developments in testing techniques to expose traces of drugs that were undetectable previously.

Usually Doping cases are handled by the relevant national federations and national anti-doping agencies but the IOC has decided that new information from re-tests will be dealt with by them.

“We want to keep dopers away from the Olympic Games in Rio de Janeiro (in August). This is why we are acting swiftly now,” IOC president Thomas Bach said last week when announcing the re-checking of 265 samples from the 2012 London Olympics.