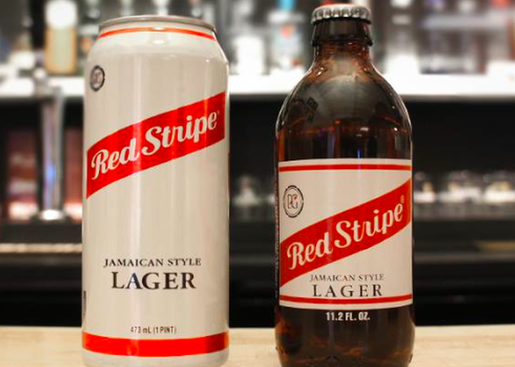 Beer brand Red Stripe wins right to call itself Jamaican again, following a court ruling in their favor. The company was taken to court on the grounds of misleading labeling, after the company moved brewing production from Jamaica to Pennsylvania in 2012. The Judge however ruled that the labeling was not enough to confuse consumers.

The lager has been brewed in Jamaica, beginning in 1938. However in 2012, owner Diageo-Guinness decided to base production for American markets in Latrobe, PA. Labels and secondary packaging disclosed that the beer was brewed in Pennsylvania but phrases like “Jamaican Style” and “Taste of Jamaica remained on the labels.

These phrases are what led the argument that landed Red Stripe in a San Diego federal court recently. Aaron Dumas and Eugene Buner filed a lawsuit alleging negligent and intentional misleading labeling on the part of Diageo. The court dismissed the claim without prejudice last month. The notion that the Jamaican lager would have to be brewed in Jamaica would also suggest that a Swiss army knife had to be made in Switzerland. The court argued that the nationalities are modifiers of their respective products, not statements of origin.

“The mere fact that the word ‘Jamaica’ and ‘Jamaican’ appear on the packaging is not sufficient to support a conclusion that consumers would be confused regarding the origin and ingredients of the beer,” Moskowitz wrote. There is no legal duty for companies to counter such notions, even if consumers had a preconceived notion that Red Stripe was made in Jamaica.

The potential for this type of lawsuit s not limited to Red Stripe. Beck’s beer has packaging using the phrase “Originating in Germany” and both Blue Ribbon and Harpoon pride themselves as “Belgian Style.”