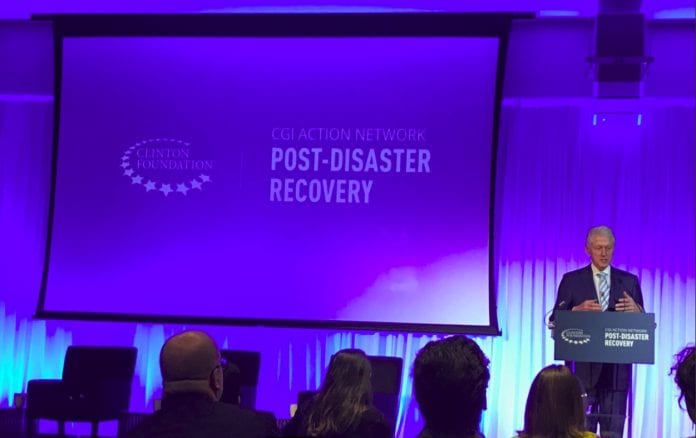 The initiative, coming just over six months after hurricanes battered many islands in the Caribbean, is aimed at bringing together leaders from across sectors to develop new, specific and measurable plans that will advance the recovery and promote long-term resiliency across the region, according to a statement.

Following the devastating hurricanes that tore through the Caribbean region in September 2017, local leaders of Puerto Rico, the U.S. Virgin Islands, Dominica, and Antigua and Barbuda approached Clinton to help them build back better.

The Action Network formally launched with a day-long invitation only event and saw participation from more than 350 leaders, including high-level representatives from government such as Prime Minister of Dominica, Roosevelt Skerrit.

Dominica was battered by Hurricane Maria on September 18, 2017. Also in attendance was Governor Kenneth Mapp of the U.S. Virgin Islands, whose islands were battered by both Hurricanes Irma and Maria last September.

The focus was on the immediate and long-term hurricane recovery needs for the Caribbean islands, which faced back-to-back hurricanes that caused over $150 billion in damage last Fall. Some communities are still struggling to recover. In Puerto Rico, more than 150,000 are without power and many lack access to clean drinking water.

One of the biggest challenges for recovery has been the lack of an emergency communications system as the next hurricane season quickly approaches.

The Clinton Foundation says it is using its past work in Haiti to model its future help in the islands battered by storms in 2017, adding that it’s ready to move forward with building homes and schools in Dominica and installing solar power in hospitals and clinics in Puerto Rico.

“The [Caribbean] has many treasures,” Clinton said as he opened the UM event, “but it’s also one of the most vulnerable areas in the world to the ravages of climate change.”

Meanwhile, with the start hurricane season less than two months away, the Patterson Foundation is providing $250,000 to NetHope to create the Caribbean Disaster Response and Preparedness Program.

NetHope works with global leaders in technology and philanthropy – including Microsoft and Facebook – to change the world through technology and were part of the official Clinton meeting Tuesday.

During the 2017 hurricane season, NetHope deployed its teams across the Caribbean to provide emergency telecommunication services, including the provision of connectivity to first responders and communities in over 80 locations across Puerto Rico, Dominica, Barbuda, the British Virgin Islands and St. Martin.