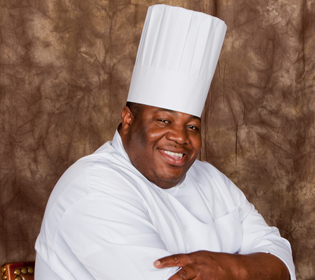 First hitting the world culinary stage as a popular contestant on Bravo Hit, “Top Chef: Las Vegas,” the chef is from Mare Rouge Haiti, and was trained at the College Aimee Cesaire and La Varenne Ecole de Cuisine. Having cooked for varying establishments such as the Pelican Bay Foundation and the Montauk Yacht Club, he has cemented himself as an expert in diverse flavors—often incorporating his own Haitian Creole influences with French-Asian Fusion cuisine. Though growing up in a poor family, his grandmother’s culinary gifts, says Chef Duprat, inspired him to enter the profession.

Duprat has also been a strong advocate in Haiti for the sustainment food movement. Duprat has also been traveling the country, cooking for celebrities including Beyonce, Usher, and even Haiti’s President elect, Michel Martelly. Chef Duprat also partner with First Lady Michelle Obama on her “Let’s Move” national campaign.