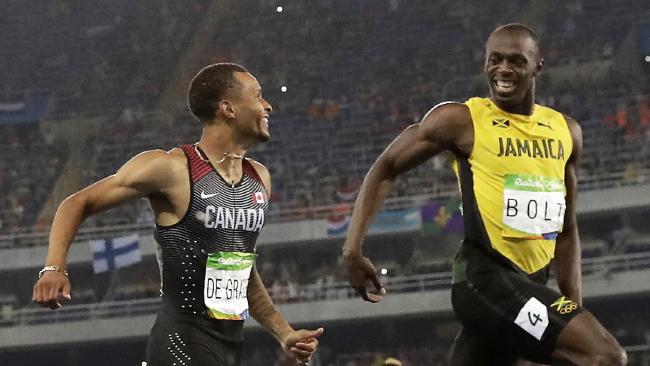 Sprint King Usain Bolt has cautioned rising Canadian sprinter Andre De Grasse to take his time in his quest to be the world’s best sprinter.

Bolt is set to retire from the sport following this year’s London World Championships, but De Grasse has recently repeatedly threatened to spoil the sprinter’s going away party by beating him at his swansong meet.

“I’m trying to win this year. I feel like I have a great chance and that’s what I want to do,” De Grasse said in recent interview.

The 22-year-old sprinter has put himself on the map in recent seasons, following a bronze medal earned for finishing behind Bolt and American Justin Gatlin at the 2015 Beijing World Championships and another at the 2016 Rio Olympics behind the same pair.  De Grasse also earned a silver medal behind Bolt in the 200m at the same event.  Despite his encouraging accomplishments, however, Bolt has warned the young runner that the top of the mountain may still be further away than he thinks.

“Over the years I’ve always tried to be diplomatic about how I answered a lot questions, but what bothers me the most when athletes are coming up through the ranks and they get to a certain level, they always want to beat me, I don’t know why?” Bolt said.

“That’s all I have to say about that.”