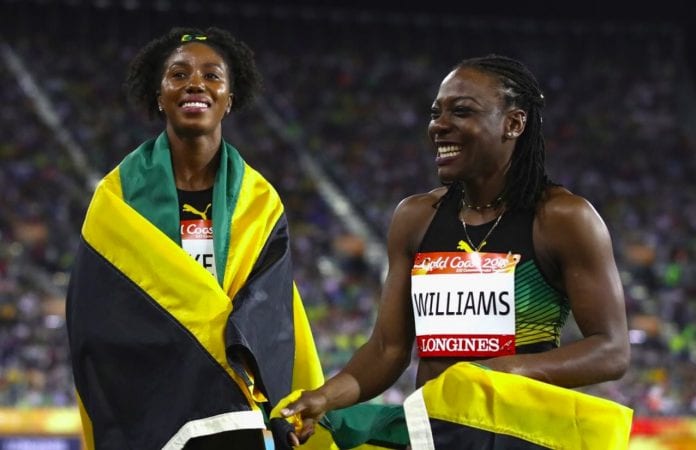 Jamaica’s Kimberley Williams produced a superb final leap to snatch gold in the women’s triple jump at the Commonwealth Games in Australia on Monday.

The defending champion measured a personal best 14.64 meters to overtake teammate Shanieka Ricketts, who had led from the opening round with a leap of 14.52.

Dominican Thea LaFond grabbed bronze with 13.92m to complete a sweep of the podium for the Caribbean.

Meanwhile, another – Jamaican Javon Francis clocked a season-best time to lead five Caribbean qualifiers into the final of the men’s 400 meters at the Commonwealth Games.

The 23-year-old, a semi-finalist at Rio 2016 Olympics, posted 45.38 seconds in finishing second in semi-final one won by Isaac Makwala of Botswana in 45 seconds flat at Carrara Stadium.

Grenadian Bralon Taplin also extended his impressive form, winning semi-final two in a time of 45.44 to clinch his place in Tuesday’s final.

The 25-year-old was joined by Jamaican Demish Gayle who finished outside the automatic qualifiers but advanced based on his time of 45.85.

And Jamaica’s Rusheen McDonald also secured his chance at gold when he came home second in the last semi-final in 45.77.

Trinidadian Machel Cedenio finished third in 46.19 but still squeezed into the final as one of the two fastest non-automatic qualifiers.

In the men’s sprint hurdles, Jamaican Hansle Parchment installed himself as one of the favorites for Tuesday’s final, clocking 13.30 seconds to win the second semi-final.

An Olympic bronze medalist in London and a silver medalist in Beijing World Championship three years ago, the 27-year-old led home teammate Ronald Levy who was second in 13.35.

Their Jamaican counterpart De’Jour Russell also booked his place in the final despite finishing fourth in 13.64, with he and Barbadian Shane Brathwaite (13.64) advancing as the two fastest non-automatic qualifiers.