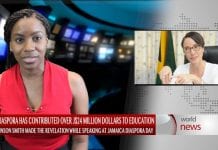 Diaspora has contributed US$186,000 to Jamaica’s education sector

A senior European Union official in the Caribbean is ready to continue the global leadership in the fight against climate change, including assisting vulnerable countries in the region. Underling the challenges posed by climate change, head of the EU delegation to Barbados, the Eastern Caribbean states and CARICOM, Ambassador Daniela Tramacere made it clear that the EU has no plans to abandon the climate-change agreement reached in Paris in 2015 by nearly 200 countries. The US recently pulled out of the agreement.

The University of the West Indies, Mona Campus in Jamaica, says it will remove a controversial bust of National Hero Marcus Garvey that was unveiled at the institution last month. This decision follows a protest by several members of the Jamaican Rastafarian community who said the bust is a poor representation of Garvey. The University says it will work towards erecting a new bust of the national hero before the start of the next academic year.

The Caribbean American Heritage Foundation is hosting a week-long showcase featuring both popular and upcoming Caribbean fashion designers and brands. Fashion pieces will be available for purchase during the fashion expo. Which is being held at the Westfield Mall in Broward County.

Curacao dethroned the Jamiacan Reggae Boyz 2-1 to claim the kingship of Caribbean soccer. The Jamaicans were defeated in the final of the Scotiabank CFU Caribbean Cup at the Stade Pierre Aliker stadium, in Martinique, on Sunday. Elson Hooi was the hero for Curacao by scoring twice to hand the heavily favored Jamaicans a surprising defeat.  Hooi put Curacao in front at the 10-minute mark before Rosario Harriott gave the Jamaicans a lifeline in the 83rd minute; but Hooi scored again two minutes later. The win marked the first time the Dutch-speaking country were claiming the title.

The US Supreme Court in a 6- 3 ruling on Monday allowed parts of President Trump’s controversial travel ban against immigrants from six majority-Muslim counties to be implemented. The court is allowing the ban to be applicable to immigrants from the six countries who do not have “bona fide relationship with any person or entity in the United States.” The court is to take up the case of the travel ban again when it reconvenes in October. Trump called the court’s ruling “a clear victory for our national security.”

It will be partly cloudy with showers likely in Broward, Miami-Dade and Palm Beach Counties with a high of 90 and a low of 79 degrees. Today’s news was brought to you by the Florida Department of Health in Broward County, who encourages you to Protect Your Baby, Vaccinate On Time, Every Time.  They remind you that Immunizations are SAFE, PROVEN PROTECTION. For more on these and other stories visit us at caribbeannationalweekly.com Make sure to pick your copy of Caribbean News weekly at your nearest Caribbean American outlet.