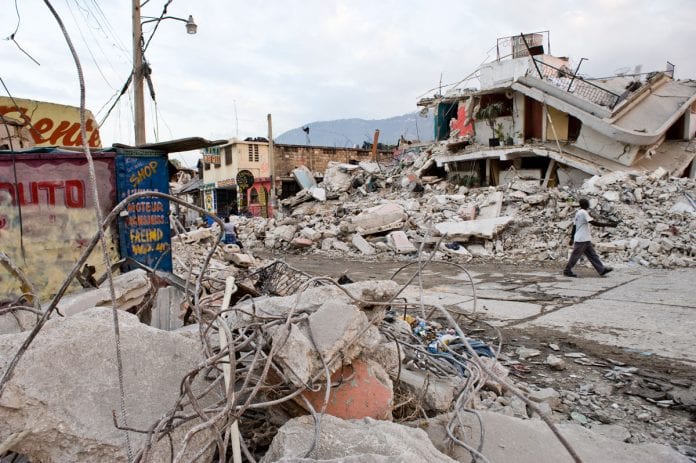 On this day in history, January 12, 2010, an earthquake in Haiti killed over 100,000 people. The 2010 Haiti earthquake was a catastrophicmagnitude 7.0 Mw earthquake, with an epicenter near the town of Léogâne, approximately 16 miles west of Port-au-Prince, Haiti’s capital.

By January 24, at least 52 aftershocks measuring 4.5 or greater had been recorded.An estimated three million people were affected by the quake. Death toll estimates range from 100,000 to about 160,000 to Haitian government figures from 220,000 to 316,000.The government of Haiti estimated that 250,000 residences and 30,000 commercial buildings had collapsed or were severely damaged. There has been a history of national debt, prejudicial trade policies by other countries, and foreign intervention into national affairs that contributed to the pre-existing poverty and poor housing conditions that exacerbated the death toll.

The earthquake caused major damage in Port-au-Prince, Jacmel and other settlements in the region. Notable landmark buildings were significantly damaged or destroyed, including the Presidential Palace, the National Assembly building, the Port-au-Prince Cathedral, and the main jail. Among those killed were Archbishop of Port-au-Prince Joseph Serge Miot, and opposition leader Micha Gaillard. The headquarters of the United Nations Stabilization Mission in Haiti (MINUSTAH), located in the capital, collapsed, killing many, including the Mission’s Chief, Hédi Annabi.

Many countries responded to appeals for humanitarian aid, pledging funds and dispatching rescue and medical teams, engineers and support personnel. Communication systems, air, land, and sea transport facilities, hospitals, and electrical networks had been damaged by the earthquake, which hampered rescue and aid efforts; confusion over who was in charge, air traffic congestion, and problems with prioritisation of flights further complicated early relief work. Port-au-Prince’s morgues were overwhelmed with tens of thousands of bodies. These had to be buried in mass graves. As rescues tailed off, supplies, medical care and sanitation became priorities. Delays in aid distribution led to angry appeals from aid workers and survivors, and looting and sporadic violence were observed. On 22 January the United Nations noted that the emergency phase of the relief operation was drawing to a close, and on the following day the Haitian government officially called off the search for survivors.