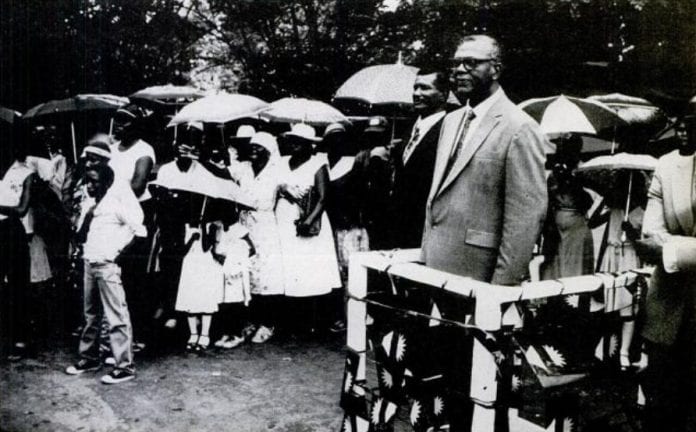 On this day in Caribbean history, November 1, 1981, the islands of Antigua and neighbouring Barbuda form an independent state ending nearly 350 years of British rule.

Demand for self-determination developed in parallel with a concern to create political and economic linkages with other small Caribbean countries. The labour movement became the main focus of political development, and gathered strength during the economically troubled mid-years of the 20th century. Vere C Bird formed the country’s first trade union in 1939, and later became leader of the Antigua Labour Party (ALP).

The first elections under universal adult suffrage took place in 1951, and were won by the ALP. The country joined the West Indies Federation at formation in 1958; this arrangement

replaced the earlier Leeward Islands federal grouping of which Antigua and Barbuda had been part. The West Indies Federation collapsed in 1962 – too late to revive the old Leeward Islands federation, since most of the eligible Eastern Caribbean countries were in the process of moving towards independence.

Under the West Indies Act 1967, Antigua became an associated state with internal self-government, the UK retaining control of foreign affairs and defence. Vere Bird Sr became the first Premier, but the ALP was ousted at the next elections in 1971 by the Progressive Labour Movement (PLM), led by George Walters. Both parties had their roots in the labour movement; the main difference at that time was that the PLM was campaigning for early independence, while the ALP wanted stronger economic foundations to be developed first.

The ALP returned to power at the 1976 elections. Following the ALP’s victory, Bird led the country to full independence on 1 November 1981. Antigua and Barbuda joined the Organisation of Eastern Caribbean States at its formation in 1981.

The ALP remained in power during the 1980s, its position enhanced by divisions within the opposition. However, by the late 1980s divisions also appeared in the ALP, precipitated by allegations of financial misdealing in 1986, and of armaments sales in 1990, both involving senior government ministers. These matters led to ongoing parliamentary controversy.

In April 1992 three opposition parties merged to form the United Progressive Party (UPP). In September 1993, on the retirement of Vere Bird, his son Lester Bird became Prime Minister. In March 1994 the ALP won its fifth consecutive election victory, securing 11 of the 17 seats in the House; the UPP led by Baldwin Spencer took five and the Barbuda People’s Movement one.