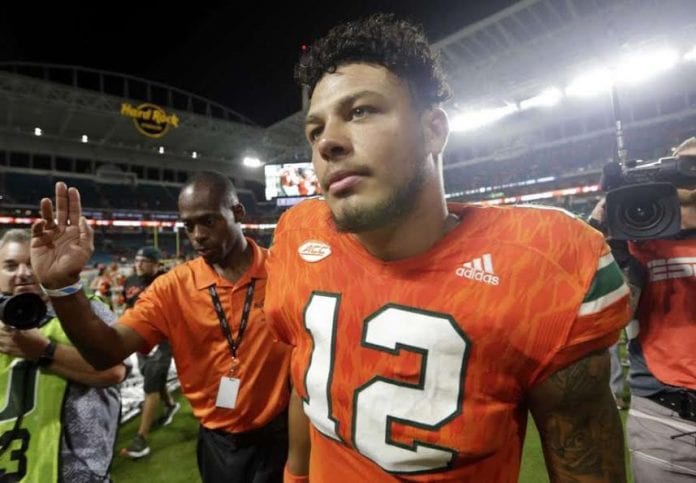 The University of Miami Hurricanes, are the talk of college football in America. On Saturday night at the Hard Rock Stadium in Miami Gardens the ‘Canes sent their fans into the stratosphere when they pounded the hitherto vaunted Notre Dame (The Fighting Irish) 41 -8. In the pounding Miami was excellent of both sides of the ball, and on special teams.

Not given much chance against Notre Dame

Although Miami went into the game winning seven games and having lost none, they did not really have the respect of national college coaches or those who compile national college football rankings. They were ranked number 7, and most pundits gave them very little chance of defeating No. 3 ranked Notre Dame, touted as having the best offensive line in college football.

‘Canes were too fast, too good

But the ‘Canes defense were too fast, too strong, too secure for the fumbling Irish who were forced into two early interceptions, and several fumbles, UM’s offense led by quarterback Malik Rosier and second string running back Travis Homer, took full of advantage of Notre Dame errors scoring 5 touchdowns and two field goals. Romer finished the game with 146 rushing yards.

The ‘Canes scintillating victory, which has their fans in South Florida and across the nation gushing tweets that “The ’Canes are back” gained them the respect they were not getting. The AP polls that game out on Sunday capitulated the team to 2nd place nationally.  This is the Hurricanes highest ranking since 2003 when they had 10 wins. The University of Alabama, who barely survived on Saturday remain at No. 1, while Notre Dame slipped to No. 9.

Before Saturday’s game it was announced that Miami had secur4d their Coastal Division title. The ‘Canes will play national defending champion Clemson, ranked No. 4 in the AP poll, in the ACC Championship game on Dec 2 in Charlotte, North Carolina.

However, the ‘Canes ultimate goal is bigger than the ACC Championship. There is real possibility if the team is ranked in the top 4 nationally on December 3, that it will compete with the other top three teams for the national championship title. There is no question that the Hurricanes are improving with each game and a national title is not a vain hope.

For recent article on the Miami Hurricanes, click the link: come from behind win