New US Ambassador to Jamaica Identifies Strengthened Relations in Trade, Investment, and Education as Priorities 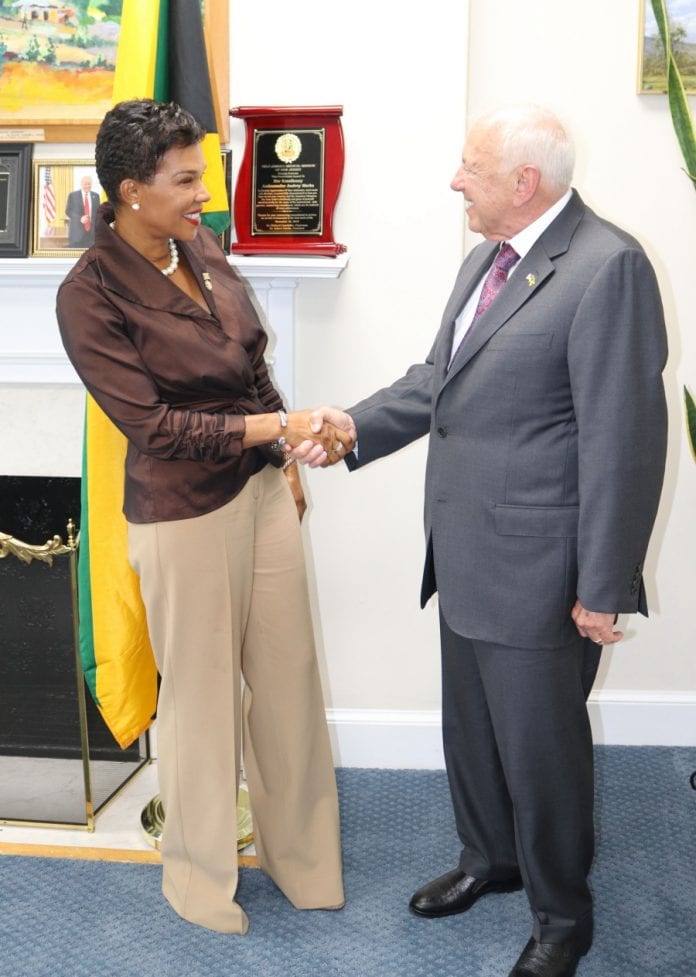 WASHINGTON, D.C. – The new United States Ambassador to Jamaica says he is looking forward to helping to further strengthen the relationship between Jamaica and the United States.

Ambassador-Designate Donald R. Tapia said, “From day one, the United States and Jamaica have had a strong relationship. We have a friendship that we have built on for many years. One thing that is strong is the freedom that both countries enjoy.”

The Ambassador made these remarks during a courtesy call on his Jamaica counterpart, Her Excellency Audrey P. Marks, at the Jamaican Embassy in Washington, D.C.,. on Monday.

He told the Jamaican Ambassador: “I am looking to deepen the relationship between both countries. I am looking to increase trade; to work alongside your government and the Donald Trump administration to look at how we can address the problem of drugs, guns and human trafficking. These are major problems for both countries and we have to find a way to tackle them. “I will use my good offices to work with the US government to see how we can come up with solutions to address this major problem,” he stated.

Ambassador Tapia noted that he would be working on the full implementation of the US Jamaica Energy cooperation agreement signed last November 2018 by Prime Minister Andrew Holness and US Secretary of Treasury Steve Mnuchin. He also shared that his priority will on education projects. “I have advised my Embassy staff that I would like to visit all the high schools in Jamaica to speak to the students and to let them know the importance of education.

“Education is very important to the Jamaican youth, we have to give them the hope, because with without hope even in the United States there is no future.” He went on to emphasize how Jamaica was suffering from a brain drain, and “we have to find ways and means to halt that trend, and one of the ways is through education.”  He noted his interest in bringing technical skills into Jamaica as well as more US companies “as a way of helping to give more employment and to stop the brain drain.”

The new US ambassador, an Arizona businessman, is a former CEO of ESSCO Wholesale Electric.  He will assume duties at the end of the month. He will succeed Luis Moreno.

For her part, Ambassador Marks congratulated the American Ambassador-designate on his diplomatic assignment. She thanked him for signaling his strong interest in collaborating with Jamaica on several key issues related to the island’s development.