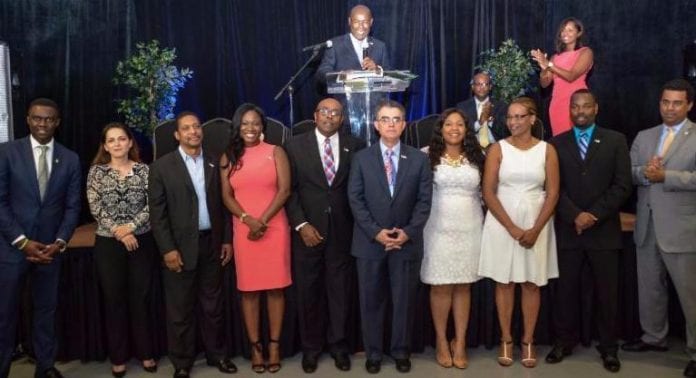 The Haitian-American Chamber of Commerce of Florida (HACCOF) held its first annual Top 20 Under 40 Young Professional (YOPROs) awards dinner recently at the Little Haiti Cultural Complex in Miami, Florida. This event honored 20 young professional Haitian-Americans, recognized for their commitment and contributions both professionally, civically, and academically to the Haitian community. This group of vibrant, energetic, creative and out-of- the box thinkers, “YOPROs” are an expression of culture and pride throughout the Haitian community.

Patricia Elizee, President of the Haitian Lawyers Association and Partner at Elizee Law Firm, was named laureate of the Top 20 Under 40. Elizee won a trip to Haiti, sponsored by Karibe Hotel, AmCham Haiti, and Royal Decameron Indigo Beach Resort and Spa. She will also be attending a parliamentary meeting. Ms. Elizee was also awarded a trip to the Congressional Black Caucus sponsored by Dr. Larry Pierre of the Greater Miami Health Education and Training Center.

“I am excited to see the HACCOF highlight young professionals through the YOPRO initiative,” said Elizee. “Being chosen by HACCOF to be part of the first class of Top 20 Under 40 was an honor. Having my fellow honorees chose me as their valedictorian is extremely humbling. This is the highlight of my career so far. I thank HACCOF for their leadership.”

More than 250 individuals attended the event, which not only honored Haitian-American YOPROs, but also recognized G. Eric Knowles, President and CEO of the Miami-Dade Chamber of Commerce, and Chairman Keon Hardemon of the City of Miami Board of Commissioners, for their significant contributions and dedication to the Haitian American community in South Florida.

In attendance were some the Haitian community’s most influential leaders, including Chairman Jean Monestime of the Miami-Dade County Board of Commissioners, and Gandy Thomas, Consul General of Haiti in Atlanta, Georgia.

In 2017, the Haitian American Chamber of Commerce of Florida plans to honor a new group of Top 20 Under 40 YOPROs at its annual dinner.