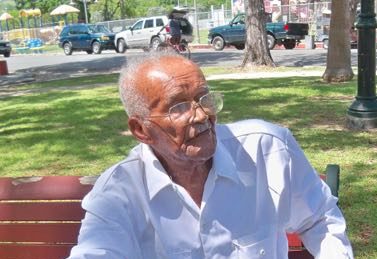 “On behalf of the Members of the 116th Congress, my staff, and my family, I extend my deepest condolences to the family, loved ones, and friends of Mr. John “Johnnie” Tranberg, on his passing.

“Even before the official transfer of the Virgin Islands from Danish to American rule in 1917, John Tranberg was born in the hills of Frederiksted’s Northside. He loved to farm, family was important to him and he dedicated his life to bettering his community and his country. One of seven children, Mr. Tranberg was born April 17, 1918, to Lauritz Tranberg and Virginia Percival Tranberg. His father was Danish and his mother was West Indian. In 1944 Mr. Tranberg was drafted and served in the Army in Hawaii as a driver for officers during WWII. He said he always knew he would live his life on St. Croix and farm. He was married to Cynthia Petersen and had four children. He worked at Sanford and Sons doing construction and concrete laying. He operated heavy equipment for Meridian Engineering. Mr. Tranberg was a true Virgin Islander.

“Mr. Tranberg’s life was characterized by a depth and height of devotion and service to all persons he frequently came in contact with, especially in his community of St. Croix. He was, indeed, a giant with great courage, total commitment to the Virgin Islands, immaculate in character, and yet simple in manner. The Virgin Islands of the United States has lost an iconic Virgin Islander but Mr. Tranberg’s legacy has left an indelible mark.  It is my hope that the Almighty God will lend his comforting hands to those left behind to mourn Mr. Tranberg’s passing.”