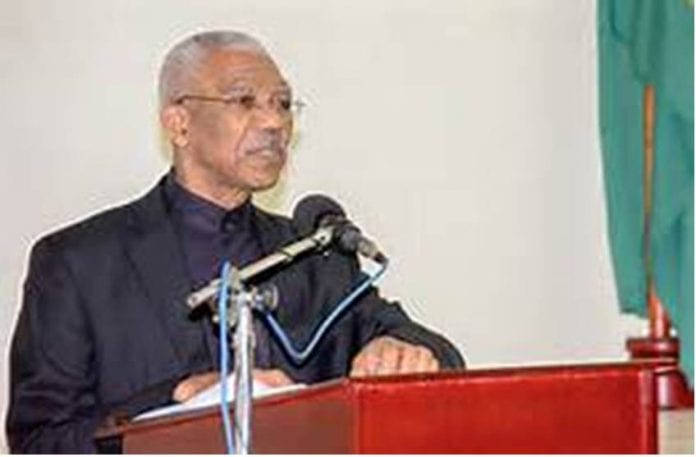 President David Granger of Guyana, will seek to reassure the international community that Guyana will reduce its use of mercury in its mining industry, and also eliminate its practice, when he attends the Conference of the Parties (COP) to the Minamata Convention in Geneva, Switzerland this week.

Granger, who is scheduled to depart for Geneva on Wednesday says Guyana takes the protection of its environment very seriously and has been working to reduce the use of the deadly chemical.

During a recent interview in New York, Granger also said it is time for firmer action to be taken to prevent environmental degradation and loss of human lives.

“I think that it is very important because the reckless use of mercury could be harmful to the population and, of course, it can cause damage that would last a very long time. It is my intention not just to reduce, but to eliminate the use of mercury in the mining industry. It is time for all Guyanese to wake up to the danger. We have had a mining industry in Guyana for maybe over a century and a quarter, but people have been very reckless and my visit to Switzerland is, of course, concerned with reassuring the international community that Guyana wishes to co-operate with it in order to bring this sort of environmental damage to an end,” the President said.

Guyana signed on to the Convection in October 2013, which aims to reduce the risks of mercury contamination around the world.

Switzerland is working to locate the convention’s secretariat in Geneva, which is already a center of expertise in hazardous chemical products and wastes.

According to the Convention’s website, the objective of the Minamata Convention is to protect humans and the environment around the world from mercury emissions caused by human activities.

The agreement regulates the use of this heavy metal in manufacturing processes and products, the reduction of emissions and the management of mercury-containing wastes.

US Marks 9/11 Anniversary at Tributes Shadowed by Virus

Jack Warner Released from Hospital Being Treated for COVID-19